31. WHATEVER HAPPENED TO RICHARD "OLDUVAI" DUNCAN?

For the benefit of peak oil newbies: Richard "Olduvai" Duncan, PhD, is one of the ridiculous, alarmist parasites who have attached themselves to peak oil. Perhaps his most notable "prediction" is the following from March 5, 2001:

A previous study put the 'cliff event' in year 2012 (Duncan, 2001). However, it no appears that 2012 was too optimistic. The following study indicates that the 'cliff event' will occur about 5 years earlier than 2012 due an epidemic of 'rolling blackouts' that have already begun in the US. This 'electrical epidemic' spreads nationwide, then worldwide, and by ca. 2007 most of the blackouts are permanent.Source

I was thinking of slapping Richard around a bit on this one, and got to wondering what he's been up to lately. Did some googling, but it seems we haven't heard from Richard in a while. His website is dead, and the Institute on Energy and Man, of which he is the Director (and sole staff member :P) doesn't seem to have a web presence. Nobody knows (or seems to care) what happened to him.

Duncan's grandiosely -named "Olduvai Theory" is a variant of die-off theory, and a perennial favorite amongst the dead-enders. The theory is summed up in the following graph (click on the image for a clearer view): Doomers like the theory because it gives specific, early dates for catastrophic mayhem. The following sketch, which was probably drawn by Duncan with his crayon set, is all over the web, and ubiquitous in peak oil circles (as usual, click for a better image):

Source
Duncan's explanation of the diagram can be found here.

The most retarded part of Duncan's theory is the complete lack of a mechanism connecting peak oil with massive, permanent power outages. In the U.S., virtually all electricity is generated from coal, natural gas, nuclear and renewables, as can be seen in the following pie chart from the EIA's Annual Energy Review 2003 (P. 222): 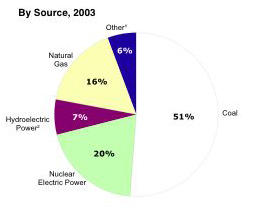 Oil accounts for only 3% of U.S. power generation, so peak oil will have no significant effect on electricity grids in the United States.

Re: The rolling blackouts

The ones that occurred in California in the early parts of this decade were courtesy of our good friends at Enron, who witheld power from the California grids to create an artifical shortage, driving prices through the ceiling and lining their pockets. They even bragged about it on tape. Do a google search for the Enron tapes and you'll see what I mean :<

The blackouts in the U.S. Northeast, the Upper Midwest, and Canada were caused by an outdated electrical infrastructure that was so fragile that a tree branch plunged 50 million in the dark for 3 days. This was partially an infrastructure problem, one that could be remedied if laws were passed to hold private distributors accountable for the upkeep of their nodes in the grid.

Stability of the power supply is a national security issue, go government intervention is warranted in this case!

I love the message of the caveman -> astronaut -> caveman chart. Apparently, after Peak Oil we won't even be smart enough to grow food on fields like in the pre-industrial era...

How can anyone in their right mind believe that..?!

In a recent presentation I held with friends at the University of Pittsburgh, I warned people about doomers and crackpots within the PO "community". They really ruin it for those of us who try be serious about the problem and look forward to tomorrows solutions.

Keep up the good work, JD

While I don't agree with the dead-enders, you do your readers a disservice by saying that Peak Oil won't affect electricity generation. While it's true that only 3% of electrical power generation comes from oil, many of the parts in the infrastructure (including 100 million or more transformers) are lubricated by oil, and 90% or more of all fuel utilized in power generation is transported by oil-powered machinery - mostly by train or ship. Natural gas is also close to peaking, and that is used for more than 20% of power generation in the US. Will the world end? Probably not. It's certainly going to affect prices, however, and with utility deregulation there isn't much of an incentive to improve the infrastructure.

Duncan points out that energy production per capita peaked in 1979. The simple explanation for this is that the birthrate also peaked around the same time, and that since then developing world has been having babies faster than the developed world. It's a little thing called "prosperity lowers the birthrate", and it's the same reason why grain production per capita has plateaued. People in the developed world simply cannot eat any more and are having fewer babies than the people who eat less, hence the average declines.

Note that according to Duncan's graph, we are already well into the Olduvai "slide", and our current period should resemble "the "Great Depression" of 1929 to 1939: unemployment, breadlines, and homelessness." Not. I've noticed that on doomer forums posters often cut off the right half of the picture to hide this inaccuracy.

Governments have lost respect. World organizations are ineffective. Neo-tribalism is rampant. The population is over six billion and counting. Global warming and emerging viruses are headlines. The reliability of electric power networks is falling. And the instant the power goes out, you are back in the Dark Age.

Hey, why don't we just give up? It's not as if civilization is worth preserving anyway, is it? Better go buy some baked beans and some ammo and wait for the end!

Congratulations Mr. Olduvai, you have joined the proud and ancient lineage of failed doom predictions. This kind of fatalism does absolutely nothing to solve our problems. All it does is scare the crap out of gullible peak oil newbies and taint the credibility of people who are genuinely concerned with sustainibility.

Plus it's sort of funny how he just throws in "neo-tribalism", global warming and emerging viruses for good measure.

And what the bleep is neo-tribalism? Tribalism is as old as the hills, there's nothing new about it.

It's called looking at sensationlistic headlines, getting scared and rhapsodising about the good old days while spouting generalities. He can't even be bothered to make his graphs look professional.

You guys do not represent your opinions very well. I have been studying energy issues for awhile, and while questions remain in the PO theories they are not the ones you so brilliantly raise. I will be glad to answer any question you may have regarding Peak Oil and all of the above posts. Take me up on it, challenge me. What people do not realize is that numbers speak for themselves; global oil production is not increasing equal to the increase in demand. Why does violence spike prices, why does a hurricane kill supply? Because supply is limited and demand is increasing. China and the U.S., and everyone else knows this. Global conflicts we see today are all related to resources and market control. Oil is the fuel behind all of the other energy systems. We cannot maintain a nuclear station, or dig coal, or grow and harvest mass fields of food to support failing cities, without a cheap and abundant energy source. Our lifestyles are built on the notion that energy comes easy.
Our arrogance is only part of the problem. Study what energy companies have invested in over the last decade, when it comes to their vast fortunes and planning the future, you'll se for yourself who buys the Peak Oil 'nonsense' and who doesn't. Ultimately, it's people like you who will exacerbate the problem, and when you are humble and realize America is weak, it will be late in the game.
Dont get caught in the goofy details, look at the bigger picture.