The following Table comes from a report by the Stockholm Environment Institute called "Guidelines on the Use of Urine and Faeces in Crop Production" Source(pdf), P. 6 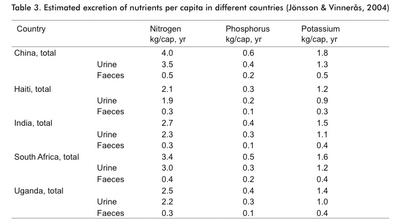 In 2002, the population of the U.S. was about 288,000,000 (source: New York Times Almanac, 2004). Therefore, calculating from the Chinese values, the total fertilizer production in the U.S., per year, in the form of human urine/faeces is roughly:
Nitrogen: 1.1 MMtonnes
Phosphorus: .17 MMtonnes
Potassium: .5 MMtonnes

Percentages of total U.S. fertilizer use which could be supplied with human urine/faeces are thus:
Nitrogen: 10%
Phosphorus: 4%
Potassium: 11%

Now let's turn to the figures for livestock waste (click to enlarge).

Source
Fertilizer in livestock waste, per year, in the U.S. is roughly:
Nitrogen: 5 MMtonnes
Phosphorus: 1.3 MMtonnes
We can also get the following ballpark figure for potassium, assuming that animal waste contains 3 times as much potassium as phosphorus (as is the case for humans):
Potassium: 4.1 MMtonnes

This is pretty good, although there are clearly a lot of leaks in the system which allow nutrients to escape the cycle. These include:
1) Run off waste (nutrients flowing into water)
2) Escape of volatile nitrogen into the air (ammonia)
3) Human carcasses which are not composted
4) Animal parts which are not composted (bones, blood, hides, teeth etc.)
5) Kitchen/yard/garden wastes buried in land fills
6) Food exports etc.

Nice, but you don't consider that we'll probably have less livestock in a reduced-consumption scenario. Meat is inefficient.

Also you get a significantly lower number using any country other then China.

The other thing to think about is succession planting etc. The organic techniques reduce need for inpouts (at the expense of outputs) but then again, it might be able to close the gap.

The other thing to consider is that we may need to only feed cattle plants that fix their own nitrogen.
I'm not sure what I'm adding to the conversation, but there it is.