Indonesia drastically hiked fuel prices much higher than expected on Friday despite two days of nation-wide street protests, including clashes between police and scores of students in Jakarta.

President Susilo Bambang Yudhoyono, speaking before the increases were unveiled close to midnight, urged Indonesians to accept a "bitter" policy that he said was vital to rescue Southeast Asia's largest economy.

Earlier, riot police fired tear gas and warning shots into the air as they clashed with students in Jakarta. It was the first sign of real violence among protests that hit numerous cities ahead of the price increases on Thursday and Friday.

Notice that the price of gasoline is still absurdly cheap in Indonesia. The same is true in Iran:

Despite higher oil revenues, Iranian budget deficits remain a chronic problem, in part due to large-scale state subsidies on foodstuffs, gasoline, etc. Expenditures on fuels were estimated at $4.7 billion in 2004, and the country's parliament (the Majlis) has rejected measures to raise consumer prices. To the contrary, in January 2005, the Majlis decided to freeze domestic prices for gasoline and other fuels at 2003 levels. Currently, gasoline costs less than 40 cents per gallon in Iran, far below market cost.Source

Gasoline subsidies are a widespread phenomenon, and the following map gives an overview of the situation (click on the image to enlarge): 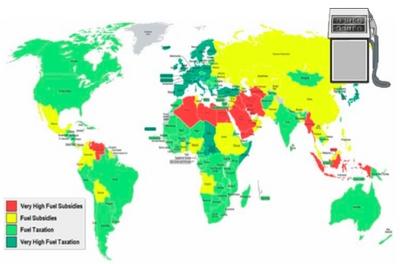 Subsidies for fossil fuels are massive, world-wide. The phenomenon has two faces:

Policies in OECD countries mainly support energy production while developing countries subsidize energy consumption. While this report hasn't listed every single last subsidy, the global total is still impressive: about $350 billion yearly for subsidies to energy production and consumption in the early 1990s - roughly two per cent of world GDP. Since then subsidies may well have been reduced by as much as $100 billion because of reforms that substantially raised domestic energy prices in Russia and China.Source

The total elimination of all these subsidies is a worthy long-term goal which free marketeers, peak oilers and environmentalists can all agree on. The potential positive impacts are substantial:

Studies by both the World Bank and the OECD indicate that getting rid of energy subsidies would raise real incomes globally by three-quarters of one per cent, although the gains would be unevenly distributed. Most developing countries would be better off; in particular, the former Soviet Union and Eastern European countries would benefit, with an expected increase in income of 20 per cent. The major exception would be China, where the deterioration in terms of trade might result in an average real income loss of just below one per cent per year. According to the Bank and the OECD, the other losers would be energy-exporting countries, with an estimated decrease in real income of five per cent annually. However, a specific study of three such oil exporters - Algeria, Iran and Nigeria - concludes that bringing domestic oil prices up to world levels would generate $69 billion annual income. That's because removing energy subsidies would improve the efficiency of domestic oil use, resulting in savings of between 10 per cent and 18 per cent of current production, which could then be sold abroad.(Source: same as above)

You admit yourself a big problem with eliminating subsidies: It'll be bad for China. Ergo, China will fight it tooth and nail. Ergo it'll be really tough to make happen.

What is the color on that map for the countries that neither subsidize nor tax gasoline, but allow the price to be set at the level that reflects its true costs?

Removing fuel subsidies in Indonesia has a rocky track record. In 1998 Soeharto removed fuel (and food) subsidies at the urging of the IMF. The result was massive rioting that ultimately ended his regime. In 2003, president Megawati Soekarnoputri, was forced to rapidly (and embarrassingly) backtrack on fuel-price rises for fear of meeting a similar fate.

The current government is caught in an economic catch-22. ViewsWire Asia warns: "The fuel-price rises will also stoke inflation. The Economist Intelligence Unit recently raised its consumer price inflation forecast for 2005 to an annual average of 8.1% (from 7.8% previously) because of the expected subsidy cuts. However, the surprising scale of the latest cuts means we will probably raise our forecast again, to something in the region of 8.6% on average for the year as a whole. The year-end inflation rate may well approach 11%.

As a consequence, interest rates will also have to rise—though real interest rates will still not be high. This could affect domestic investment, which will have a crucial role to play in underpinning economic growth in 2005 and 2006. The impact on foreign investment will be negligible, however, as foreign investors do not typically borrow locally. In any event, despite higher interest rates the broader impact on investment of the fuel-price hike is likely to be positive because of the signal it sends about fair pricing, the government's willingness to make tough decisions, and so on. Although the Bali bombings could have a more negative impact on investor sentiment, key projects in mining, oil and gas, and infrastructure may be relatively unaffected as investors in these sectors often have a high tolerance for security risk."

It is important to note that many people in Indonesia use kerosene as cooking fuel.