Traditional PV panels are highly efficient (at more than 20%), but they are very expensive and take a long time to pay for themselves, if ever. They're also bulky, inflexible and difficult to install. Fortunately, a new generation of solar cells will soon be on the market that will revolutionise the world of solar power by using either nano-crystals or special polymers.

These new solar cells are extremely cheap and far easier to manufacture than traditional PV panels, and they're already a reality. In the past, the only obstacle to their widespread adoption has been their efficiency (around 1%, compared to more than 20% for traditional panels). But that's quickly changing. A team at UCLA announced last month that they have more than quadrupled the efficiency of Organic Polymer Cells to 4.4%, and researchers at New Mexico State University and Wake Forest University have made nanotech cells with an efficiency of 5.2% Source1, Source2. They expect to get beyond 10% in the next five years, at which point these cells will be marketable.

Apart from their extremely low cost, the whole point about these new cells is that they are incredibly flexible and unbelievably strong. They could be woven into fabrics, such as curtains, tents or clothing, or printed onto a lightweight, flexible film that can be stretched over a roof. They could be painted directly onto walls and will eventually be so strong they can even be stretched over a road. In other words, almost every type of surface can be covered by solar cells at a fraction of the cost of today’s panels.

You can buy cheap and flexible low-power solar panels already: 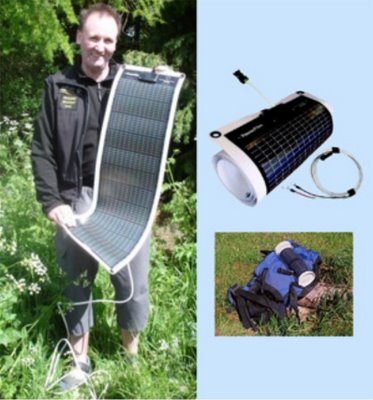 With CSIRO in Australia creating a small, inexpensive hydrogen-production device the size of a microwave, and the ENV hydrogen-powered motorbike going on sale next year for only a few thousand dollars, it's entirely plausible that a 100% solar/hydrogen-powered lifestyle will be both affordable and cost-effective within a decade.

That bike is friggin amazing, I think it'll be 5 years or so before we see roll up 4% or higher cheap solar panels at best buy or wal-mart, and probably a bit longer before we see the new method of making hydrogen available for even commercial businesses - but that bike... damn


Just think about it, that bike could *REPLACE* a car for a good percentage (I'd say at least 20%) of the people in the US who use cars, and who knows where it could go from there?

As long as we remember that we don't have to develop an overnight solution to replace 100% of the world's oil supply, look at every alternative, and factor in how much waste we can remove from the system, the problem of Peak Oil starts to look less like a challenge to the very existence of modern society, and more like an economic hurdle (albiet a big one) which can be overcome if we have 10+ years to do it in (which we may very well)

I think nanotech may very well go down in the history books as the technology that saved us from energy armageddon ... and the Internet, of course!

Note that the currently on sale flexible solar panel is approximately $21.6 per watts, more than 5 times expensive than the traditional solar panel, which you can get at about $4 per watts.

What they claim that this thing will become "marketable" in 5 years. My understanding is "marketable" only means they will be comparable to traditional solar panel in price per watts in 5 years. After that there is still a long way to go before it really becomes much cheaper (<$1 per watts) and affordable for wide usage. So give 10 or 15 years before you see this thing will become widely available, if at all.

What a coincidence... I just posted something about solar panels on my own blog:

Here's a tiny url to my link for your convenience:

What is not answered is how long it takes that hydrogen generator to recharge that motorbike. In direct sunlight, of course.

"What they claim that this thing will become "marketable" in 5 years. My understanding is "marketable" only means they will be comparable to traditional solar panel in price per watts in 5 years."

Not true, all the companies understand that "marketable" implies $1 per watt or less. There's a useful graph on the www.heliovolt.com Market Info page.

The only issue here is scalability.

Also, Wake Forest now believes they can hit 10% by next october:

Belief may not be the same as reality, but it means something at least.

They look like they are making pretty significant technological strides with these, I wouldn't be suprised to see them at best buy by 2010

I think the same thing is happening with batteries, and that the window of opportunity for hydrogen has closed.

Battery technology failed to step up to the challenge in the 90's, when GM made a big bet on them. They had many flaws, but probably the biggest was the combination of low capacity and very slow recharge times. This created an opening for hydrogen, which in theory could be poured into a vehicle like gasoline.

Now, battery capacity, power and recharge times are finally, suddenly, making very large leaps with nanotech li-ion batteries (A123systems, Toshiba, Altair). The only obstacle now is price, and there's no reason to think that this won't fall at least as quickly as fuel-cell/hydrogen costs. With relatively small infrastructure problems (electricity is everywhere -only public fast-charge stations would need to be added) and an easy transition in place (hybrids with gradually growing batteries), hydrogen has lost the race.

Now natural gas is scarce in the US, and that's unlikely to change. Fuel cells and hydrogen are much less efficient when the input starts as electricity than other forms of energy storage, especially electrochemical batteries.

This is still optimistic: batteries will be more effective, and much cheaper and easier than hydrogen would have been.

That Scotteveste girl is one freaken amazing promotion! Wow! And that solar tent. How do you keep it cool though?

I know, she's pretty hilarious. They also have a kinda secret service guy with sunglasses.