72. WHO NEEDS OIL? SHIT IS FERTILIZER

"Fertilizer is made from oil" is one of the most obnoxiously repeated lies in the peak oil community. Fertilizer is not made from oil, it is made from natural gas, coal and mined minerals (see #28). But what will we do when we run out of those resources? We will turn to our own urine and excrement.

Composting is a subject which futurists and back-to-the-earthers can all agree on. It is critical for ordinary life on earth, as well as for space travel and understanding sealed, cyclical biospheres. It drives me crazy that people have such strong childish taboos about a subject which is so critically important. We need to hire an army of ecologists and do a manhattan project on the human shit cycle tomorrow.

There is a fascinating old book I read once called "Farmers of Forty Centuries" by F.H. King. I believe it was written in the early 1900s, and describes a trip the author (an American) took to China to inspect its agriculture system. Shit was an extremely valuable commodity in the cyclic Chinese system. It even went to the point where a little boy would ride on the back of an ox while it worked driving an irrigation pump. His job was to collect the ox's shit in a ladle. There was a photo of that in the book.

The book (without photos) is in the public domain, and available on line here:
Farmers of 40 Centuries

One of the most remarkable agricultural practices adopted by any civilized people is the centuries-long and well nigh universal conservation and utilization of all human waste in China, Korea and Japan, turning it to marvelous account in the maintenance of soil fertility and in the production of food. To understand this evolution it must be recognized that mineral fertilizers so extensively employed in modern western agriculture, like the extensive use of mineral coal, had been a physical impossibility to all people alike until within very recent years. With this fact must be associated the very long unbroken life of these nations and the vast numbers their farmers have been compelled to feed.

This is also a great link: Civilization & Sludge: Notes on the History of the Management of Human Excreta

In Calcutta, they've been culturing fish protein from sewage for about 100 years. Basically, they let the sewage flow into a shallow pond, where it causes an algae bloom. Apparently, this clears the water of human pathogens. Then, after a delay for re-aeration, the pond is stocked with fish like carp and tilipia. Systems like this can yield 2.8 metric tons of fish per hectare, per year. The "feed" is human and animal waste. See: Sewage Fed Aquaculture Systems of Kolkata: A Century-old Innovation of Farmers(pdf). 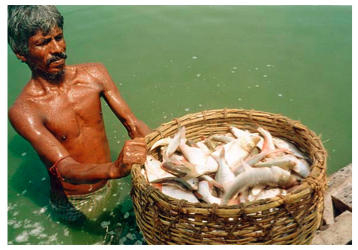 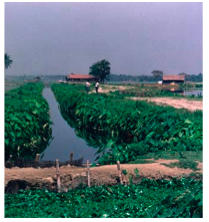 Open channel through which sewage is flown.
Lush growth of Colocasia seen on either side of the channel

From another article on shit-based fish culture:

Cities consume resources and produce both liquid and solid waste. The disposal of these wastes is increasingly becoming a problem. However, waste must be regarded as a resource for the sustainable urban development. Agriculture has always been an intrinsic part of Asian cities. In many Asian cities, the composting of separated solid waste and recycling of waste and sewage water used to be a tradition. These conventional methods are being renewed as urban agriculture is found to be providing employment, food and nutrition, land management and environmental improvement.

Kolkata (formerly Calcutta) has one of the largest recycling zones in India with age-old practices of fish culture and vegetable production. A large number of sewage-wastewater-fed fisheries have been developed on the wetlands in lagoon types of ponds in which fish are cultivated, and where sunlight, water hyacinths and phytoplankton are used to clean the water.Source.

Have to agree with you there ol' buddy.

I've got 50 acres, growing coffee & macadamia nuts on about 12 of them. Just getting a delivery of 25 metres (about 30 cubic yards) of chook poo next Monday. This stuff is simply a bit of sawdust plus the poo of about 5 000 chickens. Things grow like crazy wherever I apply it....as long as I don't let it get into the local stream.

I'm happy....it only costs Aus $18 per metre, and the chook farmer is happy, got rid of his shit. And the land I'm rehabilitating is [going to be] happy. We all win. Eventually, I'll be growing food on that land.

"About 97% of nitrogen fertilizers are derived from synthetically produced ammonia, the remainder being by-product ammonium sulphate from the caprolactam process and small quantities of natural nitrates, especially from Chile. The production of anhydrous ammonia is based on reacting nitrogen with hydrogen under high temperatures and pressures. The source of nitrogen is the air, the hydrogen being derived from a variety of raw materials, including water, crude oil, coal and natural gas hydrocarbons. The hydrocarbons provide the energy for the energy-intensive process. The high-temperature catalytic synthesis of ammonia from air is by far the main consumer of energy in the fertilizer industry. Nitrogen and hydrogen are universally available and the issue is the availability of energy.


For economic and environmental reasons, today natural gas is the feedstock of choice. The use of natural gas is accelerating rapidly, because of economic factors but also and increasingly due to environmental pressures, which work against other fossil fuels. Natural gas is expected to account for about one third of global energy use in 2020, compared with only one fifth in the mid-1990s. However, processes for ammonia production can use a wide range of energy sources. Thus, even when oil and gas supplies eventually dwindle, very large reserves of coal are likely to remain. Coal reserves are sufficient for well over 200 years at current production levels, and their location is geographically diverse. 60% of China's nitrogen fertilizer production is currently based on coal."

In all seriousness though, great blog... it's nice to read the opposite position from the tripe at so many other doomsday sites. Keep it up!

I agree that things other than oil/natural gas work as fertilizer. Heck, I vermicompost all our kitchen scraps. But there is the question of scale. It's like the people who are proud of themselves now because they're running their cars on recycled cooking oil. There isn't the scale (not enough restaurants) for the world's cars to run on just recycled kitchen oil with a bit of ethanol mixed in.

If all human sewage and all animal waste was used to make fertilizer I'm pretty sure there would be enough. In any case, by the time we get to peak coal the world population will be much smaller than today's, and we will most likely have synthetic food production. We're talking about more than a hundred years in the future, for god's sake.

JD said: "Fertilizer is made from oil" is one of the most obnoxiously repeated lies in the peak oil community.

I've been reading PO material in both books, leaflets and the web for over a year now and I've never seen that information. What I have read, and I won't send you dozens of clippings to make the point, is that almost all modern industrial fertilizers are made from natural gas, so I'm not sure what sites you've been looking at but you may find it more informative to read some that are more accurate, of which there are plenty.

One thing is true! Doomers and optimists all seem to agree that the world has to change a lot!