In the August 2005 ASPO newsletter(pdf), Colin Campbell (see #29) went on the record stating that conventional oil peaked in 2004. You can see it in the chart on page 2: 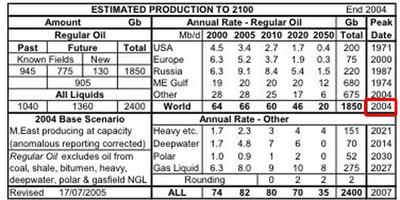 There are a few interesting angles on this one:

1) Isn't this the most damning evidence possible that peak oil is a bunch of hype? It already happened, and nobody noticed. Conventional oil production peaked, but "oil" production is soaring, and the world economy is booming.
The doomer position has always been that oil is special, and alternatives like gas and unconventional oil can't take up the slack when conventional oil declines. And yet that's exactly what's happening. According to Campbell himself, heavy and NGL (Natural Gas Liquids, which aren't even oil at all) accounted for 11% of world "oil" production 5 years ago. So when are we going to start switching to alternatives? The answer is: we already started a long time ago.

2) Campbell's forecast value of 82mbd for world production in 2005 is clearly wrong. Look at the actual stats from the EIA (world oil production in thousands of barrels per day):

3) Since ASPO is on the record stating that peak oil has already occurred, we can calculate the decline rate.

So what was conventional production in 2004? Well, if all the doomer hysteria about "damaged fields" and "bottle-brush drilling" and "falling off a cliff" is right, then we should have fallen about 17% from 2004 to 2005. That would give us a figure of 79.5mbd for 2004 which (interpolating the table) would give a total figure (including non-conventional) of about 95mbd of total production in 2004, which then dropped to 82mbd in 2005. That obviously didn't happen, so the evidence is clear. We're one year into the post-peak period, and conventional oil is not falling off a cliff.

4) Moving the conventional peak date into the past was a big change. The date in the previous July newsletter (pdf) was 2006. So why didn't Colin Campbell say a thing about it?

From big oil... not independent oil geologists you so disparage...


Chevron have said it! "The era of easy oil is over!" writes the CEO at www.willyoujoinus.com

OPEC have already said that light sweet crude is in decline. (Only the sour stuff is still increasing in production.) This backs up what Chevron has already stated, the era of easy oil is over. The age of sweet oil is turning sour.
http://www.vitaltrivia.co.uk/2005/08/26

Exxon Mobile have announced that the entire world outside of OPEC is about to peak in its production of all oil categories in the next 5 years. That is a huge announcement. It tells us that we will be dependent on OPEC for any increase in worldwide demand.
http://www.thebulletin.org/article.php?art_ofn=mj05cavallo

A senior Saudi oil geologist has stated to the New York Times that he believes Saudi oil will peak at about 12.5 to 15 million barrels a day. After that point, there can be no more growth in sour supply no matter what the world demands!

"When I asked whether the kingdom could produce 20 million barrels a day -- about twice what it is producing today from fields that may be past their prime -- Husseini paused for a second or two. It wasn't clear if he was taking a moment to figure out the answer or if he needed a moment to decide if he should utter it. He finally replied with a single word: No."

Once Saudi Arabia have peaked, then that's it — the world has peaked. There will be no more economic growth of the oil dependent variety. Indeed, current industrys such as airlines will start to go broke. The New York times quote is from the comprehensive article below.
http://www.nytimes.com/2005/08/21/magazine/21OIL.html

The Hirsch report (let me mention it once again) to the American Department of Energy has reported that the peak is near and he has emailed me that the consequences will be "dire, worldwide, and long lasting." (Download 96 page 500kb word file HERE.)

The effective end of the oil age is when we can no longer rely on the ever increasing production of cheap oil. For your average suburbanite, farmer and food distributor, the oil age ends when it costs $500 to fill the car!

And all you can do, JD, is to bag the independent oil geologists while ignoring big oil! Hmmm, you are showing up some credibility issues yourself here.