One of the key "texts" of peak oil doom is "The Oil We Eat" -- a puff piece by Richard Manning, originally published in the Feb. 2004 issue of Harper's Magazine. The piece itself is basically a misanthropic screed which talks about humans "stealing" food from animals and the earth. It also spreads the lie (debunked in #28) that fertilizer is made from oil. Here's Manning in top form:

With the possible exception of the domestication of wheat, the green revolution is the worst thing that has ever happened to the planet.Source

Manning is clearly a doomer, and a traitor to the species, who thinks the earth would be a better place without people on it, because humans are a pestilence... a CANCER.

Still... the idea of "eating oil" is interesting. It makes you wonder: if we can eat oil, can we eat uranium?

The answer turns out to be: Yes. Nitrogen fertilizer can be produced from nuclear energy. Consider this:

About 97% of nitrogen fertilizers are derived from synthetically produced ammonia, the remainder being by-product ammonium sulphate from the caprolactam process and small quantities of natural nitrates, especially from Chile. The production of anhydrous ammonia is based on reacting nitrogen with hydrogen under high temperatures and pressures. The source of nitrogen is the air, the hydrogen being derived from a variety of raw materials, including water, crude oil, coal and natural gas hydrocarbons. The hydrocarbons provide the energy for the energy-intensive process. Source

As we have seen earlier, nitrogen fertilizer is not made from oil. It is made from natural gas (or syngas produced from coal). The interesting thing, though, is that the only part of the natural gas used in the production of ammonia (the basis of nitrogen fertilizer) is the hydrogen. Since hydrogen can be produced through the electrolysis of water, it is possible to produce fertilizer from WATER, as noted in the above passage. The energy necessary for producing the ammonia can also be derived from fission, so clearly (if necessary) we can turn uranium into nitrogen fertilizer.

In fact, we could even go a step further, and use uranium to supply light, heat and mechanization power for multi-story vertical farming facilities, located in the middle of the cities they feed. This would greatly increase the carrying capacity of the earth, eliminate fuel wasted on long-distance food transport, and reduce the human footprint due to agricultural activities:

Vertical farming practiced on a large scale in urban centers has great potential to:
1. supply enough food in a sustainable fashion to comfortably feed all of humankind for the foreseeable future;
2. allow large tracts of land to revert to the natural landscape restoring ecosystem functions and services;
3. safely and efficiently use the organic portion of human and agricultural waste to produce energy through methane generation, and at the same time significantly reduce populations of vermin (e.g., rats, cockroaches);
4. remediate black water creating a much needed new strategy for the conservation of drinking water;
5. take advantage of abandoned and unused urban spaces;
6. break the transmission cycle of agents of disease associated with a fecally-contaminated environment;
7. allow year-round food production without loss of yields due to climate change or weather-related events;
8. eliminate the need for large-scale use of pesticides and herbicides;
9. provide a major new role for agrochemical industries (i.e., designing and producing safe, chemically-defined diets for a wide variety of commercially viable plant species;
10. create an environment that encourages sustainable urban life, promoting a state of good health for all those who choose to live in cities. All of this may sound too good to be true, but careful analysis will show that these are all realistic and achievable goals, given the full development of a few new technologies.Source 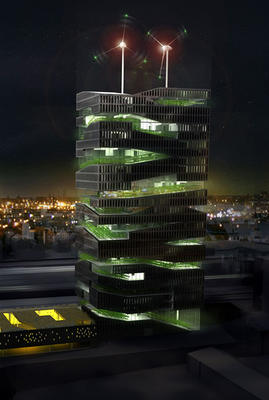 Ahhh, JD, you’ve done it again. I haven’t laughed so hard since hearing this…
http://graphics1.snopes.com/autos/audio/jackbox.mp3

First of all, I was highly amused by the way you confuse what is technically possible with what is affordable.

You argue that we could make nitrogen from nuclear power. Fine. What you did not do was cost it out for everyone, including
1/ building the power plant
2/ mining the uranium
3/ processing it
4/ running the power plant
5/ disposing of the waste “safely” if such a thing is possible
6/ decommissioning the plant after it’s usable lifetime.

When you pass all these costs on to farmers, I’m sure they’d go bankrupt or else the food would become unaffordable and then we are all in trouble.

The same with the food tower. If you grow your food in a vertical farm, how much does the food cost? Now I’m no great mathematician, but really… you can either grow wheat out in the cheaper open plains country by the hundreds of hectares, paying mainly for harvesters, fuel, and fertilizers… or you can build a multi-million dollar food tower that might feed AT THE MOST 5 to 10 families. Have you ever worked out how much land it requires just to feed ONE person? This might be part of a highly subsidized government Moon or Mars program, but back here in the real world why don't you ask your local farmer what would be financially viable… cheap land out in big sky country, or “land” you have to pay for by the meter!
And you have to provide all the “rain” and “sunlight” yourself, with your own plumbing and electricity? Hmmmm.
$2000 for a loaf of bread anyone?

Secondly, I was staggered at your ignorance of fertilizers. Sure technically you could generate nitrogen from any process that has enough energy…. I’m not disagreeing with that. But you’ve only accounted for one of the three main fertilizers!

It takes NPK to grow our foods. You’ve only dealt with the N (and very inadequately because of the expense issue you ignored.) But the PK? Do you at all admit the oil involved in mining and transporting the PK? Do you even know what they are?

Back to the drawing board JD. It was funny, though I wish those little old ladies (from the audio file) were here to teach you a lesson, you naughty boy! Please account for the PK next time you write about fertilizers, and the oil involved in obtaining and transporting them. After peak oil we might be facing peak phosphorous. As Heinberg writes, there are just too many people using too many resources too quickly.

Oil IS food… when did you see a harvester that ran on batteries?

If JD believes uranium will become the fuel of the future and allow people to continute in phantom population capacity, then peak uranium will make peakoil look like a fairy picnic. JD thinks the world will be fed by skyscrapers full of lights powered by uranium. There is also someone else who believes in this idea and he's a wacko. Look here http://www.alexchiu.com/philosophy/future.htm
I'll quote from the page directly.
"The cost of farming will be extremely low. 1 acre of land can produce millions of tons of food each year. Each year, American farmers spend 7 billion dollars on insect killing chemicals. But once we start farming in the sky scrapers, farming will become indoor. That means they no longer need to spray insect killers. Vegetables will also become cleaner and safer for us to eat."

Yeah right!. As you can see, what would happen during peak uranium, the earths population at 50 billion, all food grown in the giant building and all of them the lights go out because uranium has run out. JD give me peakoil anyday compared to that!

The day is coming where oil will be prioritised to certain groups, farmers being one of them. Peak oilers are obsessed by Free markets..

Wow, I really like this vertical farming concept. Sure it’s a new technology requiring development to become cost effective, but if the necessary technological issues are solved it’s got some real potential.

But stuff uranium. Solar is the future. Space based solar power to be specific. Electricity collected in massive highly efficient PV systems in orbit, sent to Earth down the same carbon nanotube cables that allowed the systems to be cheaply built, and distributed at extremely low costs to major cities. Then systems like vertical farming will actually be more cost effective then traditional methods.

I suspect that carbon nanotube technology will be the key technology in saving our collective asses.

JD and the medical ecology group behind the vertical farming website have the same rights (end even credentials) to speak about the future of agriculture my fellow anonymous poster.
From Heinberg's own website:
http://www.museletter.com/Richard-Heinberg.html
"Richard Heinberg is a journalist, educator, editor, lecturer, and musician."
He might be a core faculty of the New College of California but I see no reference to his studies. I do not doubt that he is a smart person but let's give academic groups with actual credentials (JD was reposting) a little bit more credit.
By the way you might want to read the "waste disposal" operations a little bit more carefully and follow their links. They were featured in the NSAIS web site so at least someone else found it a cool idea (and they do have a powerful motive: to let the ecosystems that farming destroyed revert to wild life)

I also think that the vertical farming idea is pretty cool. I support local farmers (have a few near my hometown, and I love it) Having the ability of getting local produce would be great, especially when you know that the veggies and fruit you're getting is fresh, not a few days old like it would be if you were getting it from the local grocery store

I hardly know where to start....

Manhattan high-rise offices sell for $250 to $750 per square foot. To put a fine point on it, growing space in your high-rise towers would cost about 50,000 times more than farmland. While that would not translate, directly, into the cost of food increasing 50,000-fold, it might mean increases in the 1,000- to 10,000-fold range. I’ll leave calculations of affordability to others.

I hardly know where to start....

Manhattan high-rise offices sell for $250 to $750 per square foot. To put a fine point on it, growing space in your high-rise towers would cost about 50,000 times more than farmland. While that would not translate, directly, into the cost of food increasing 50,000-fold, it might mean increases in the 1,000- to 10,000-fold range. I’ll leave calculations of affordability to others.