Let's recall the "die-off" scenario, as concisely described by Wikipedia

Some envisage a Malthusian catastrophe occurring as oil becomes increasingly inefficient to produce. Since the 1940s, agriculture has dramatically increased its productivity, due largely to the use of chemical pesticides, fertilizers, and increased mechanisation. This process has been called the Green Revolution. The increase in food production has allowed world population to grow dramatically over the last 50 years. Pesticides rely upon oil as a critical ingredient, and fertilizers require both oil and natural gas. Farm machinery also requires oil. Arguing that in today's world every joule one eats requires 5-15 joules to produce and deliver, some have speculated that a decreasing supply of oil will cause modern industrial agriculture to collapse, leading to a drastic decline in food production, food shortages and possibly even mass starvation.Source

Where does all that corn go? You can see in the following chart:

Most U.S. corn is used to feed livestock (dark blue); another large chunk is used for ethanol (purple); another large chunk is exported (yellow); and another large chunk goes into stocks (green). The part consumed by humans, directly as food, is a subset of the orange band, which represents FSI (Food, Seed and Industrial). This category also includes high fructose corn syrup (HFCS) which is a component of soft drinks, juices and ice cream, and a major cause of obesity. The USDA notes: "Food and starch, other segments of FSI use, are mature markets and projected gains largely reflect population growth."

This is further evidence that human beings aren't even close to the point of die-off due to the inability to produce enough food from the earth.

Here's another interesting data point from the Fertilizer Institute (click on the image for a clearer picture): 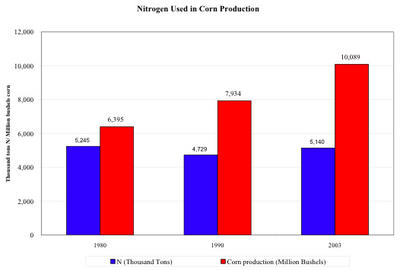 Since 1980, corn production has increased by 57.8 percent. Interestingly, that increase was achieved using less nitrogen fertilizer. Notably, in 1980, nearly 6.395 billion bushels of corn were produced using 5.245 million tons of nitrogen. However by 2003, U.S. corn production soared to 10.089 billion bushels, even as the amount of nitrogen fertilizer used dropped to 5.14 million tons. Source

If you're citing Wikipedia, why don't you make an account and start working on peak oil-related articles? There's a great deal of controversy on them right now, and you seem remarkably sane, so your help would be appreciated.

Regarding The Green revolution a couple of interesting links (and JD was right, it did not reach Africa)
http://veghome.ucdavis.edu/classes/fall2003/plb12/Green%20revolution.htm

I guess in light of the current world wide food shortages, the announcement from fertilizer industry that nitrogen based fertilizer manufacturing is going to start importing 50% of all US fertilizer needs and the long period of time it will take for other countries to pick up the slack, that this site is going to go belly up.

Well, it was a good thought while it lasted. Good luck and enjoy your dinner.