One of the rarely examined postulates of the peak oil catechism is that increasing oil prices will cause the economy to relocalize. Expensive crude will pull the rug out from under globalization, and everything will have to be made closer to home because fuel costs will make it too expensive to ship goods long distance. This myth was conclusively refuted in #55, but some of my readers are too stupid or obstinate to understand that reasoning, so allow me to take a different tack.

Source
Meanwhile, imports from China ballooned from US$ 5 billion to 20 billion: 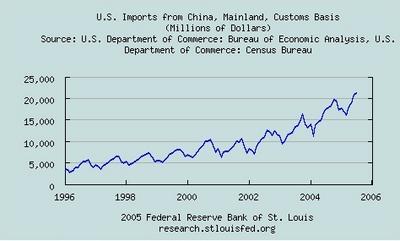 Source
And Walmart kept right on growing, as usual:

Indeed, the latest news from the auto industry is the impending bankruptcy of Delphi, and the need to move auto parts manufacturing offshore due to high U.S. labor costs:

The sad reality is that relocalization is a fantasy. High oil prices have no effect whatsoever on trade volumes, just as the calculation in #55 shows. Anybody who thinks otherwise needs to produce even a single real-world case where a product has been relocalized due to high fuel costs.

There was PLENTY of trade (and international conquest) in the era of sailing ships. Someone needs a history lesson. The "relocalization and community solution" argument is one of the DUMBEST of all of the dumb peak-oil arguments.

Oil is still afforable you "obstinate" writer. Prices at the pump have only doubled. There still is no incentive for people to relocate, but when fuel becomes unaffordable, the houses will be abandoned and people will seek places closer to work and denser communities. Oil is still cheap, it's not hardly expensive yet, hence there has been no change in the common potato head. Most of them are still waiting for america to become pre 9/11 again.

Melissa, it's concerning to see people grasping onto the few bits of good news nowadays in a sea full of bad news. This blog is contrived rubbish, what JD has said about relocation is rubbish. I'd say one thing stopping people from relocation is cost, Americans have no money to rebuild, national savings rate is negative.

There is no reason to be scared of peakoil, goto www.peakoil.com. I and many others have excellent threads detailing how you can prepare yourself step by step and ensure you and your family will be well in the future. Reading websites like this which promote a positive view of our current world energy supplies and resources will do more harm than good and make you complacent. I highly recommend you visit other websites so you can get a more balanced view on the topics and make a more informed decision.

Best of luck to you and your family melissa, especially your husband.

melissa spam? Second reading seems like it's a made up sob story. She/he has probably been posting it on all the bloggs.

The notion that there was PLENTY of trade pre-industry is only trivially correct. Most essential goods were made locally. The most likely items to be shipped long distances were expensive, lightweight items or slaves. There weren't tomatoes from 5000 miles away on sale in New York City pre industry. People grew them in New York (or at best New Jersey) or did without.

jd you really need to fix the format of your blog. Your main page is over 1.5 meg and takes about 4 minutes to load on a dialup connection.

Thanks for the tip, anon. I've been wondering if that might be a problem. I'll fix it.
JD

Labor is more expensive than oil, stupid. Kill yourself.

When transportation becomes a bigger part of the total price, the first items to suffer are cheap and bulky products. So, obviously, products that have a high value density are less vulnerable to relocation.

So a 20-foot container of potato chips has a bigger impact from rising fuel costs then a similar sized container full of computer chips.

That is why it is economical to send computer supplies to anywhere in the world, when it is hardly worthwhile to do the same with potatoes.

This comment has been removed by a blog administrator.

[Edit due to a bad character set which makes for messy fonts. I cannot use apostrophes for some reason on your blog. I just can’t. See what happens? And I wanted to tidy up some of my writing.]

Anonymous has a good point.

I personally think that the majority of daily and weekly commodity items will just have to be made locally. Maybe computers and other high tech gear, or larger white goods items, will still need to be made in bulk because some economies of scale will survive even peak oil. Who can say, it depends on how bad peak oil gets?

However, re-localizing like this is no easy matter. It is going to take a lot of work.

Why have we not re-localized yet JD? Simple, we have not begun to experience truly high oil prices!

We are still not even above the magic $80 per barrel mark, which I understand to be the equivalent of the 1970s oil crisis peak prices in the money of today. And I understand that we have a larger virtual economy that is not quite as energy dependent. So maybe we can raise the critical threshold to $100 a barrel? Who knows? And sure there are a few emergency measures that we can adopt as oil begins to decline. However, peak oil will be permanent JD! Are you really going to ask people to sleep at work permanently? ;-)

The fact is that $75 per barrel is still in a cheap oil economy. Or did you think that this was as high as they could go, JD? ;-)

It may not be the small scale relocalizion you think of, but Wal Mart is beginning to be a leader in sourcing regionally produced items that are costly to transport, and selling them by region to minimize transportation. They are doing it for business reasons. Small scale changes will be done for economic reasons and life style reasons as well.