In #178, I listed the nations of the world which have no coal. It's quite a long list, but even a cursory look shows that island nations and territories account for a large portion of these problem cases. With very few exceptions, islands have no oil, no gas and no coal, and are completely dependent on oil for all their energy needs, as you can see in the following Table of primary energy sources for Carribean nations in 1999 (click to enlarge, Source): 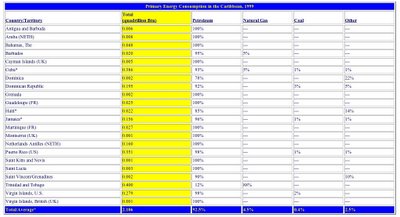 Even Puerto Rico, a quasi-state of the U.S., is severely oil-dependent:

Efforts to wean Puerto Rico from oil (by shifting to coal/LNG) are progressing slowly, as you can see from the following graph (source: same as above, click to enlarge):

In the Pacific, Hawaii is in a similar situation. In 1999, 76.4% of Hawaii's electric power was generated by burning oil (Source): 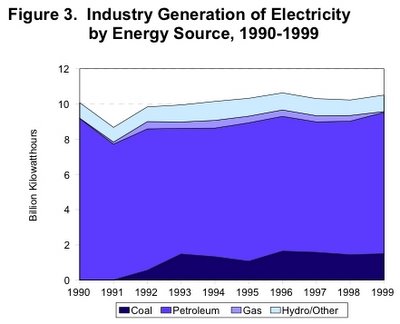 Clearly, we have a problem here: how do we shift the islands away from oil, and shield them from the punishing effects of high oil prices (or shortages)? At first glance, it looks like dark clouds are looming, but these clouds have a silver lining: sugar.

Many islands like Haiti, Cuba and Hawaii have a long history of sugar cane cultivation. As they say in Cuba "Sin azucar, no hay pais" (no sugar, no country). This dovetails nicely with the rise of Brazilian sugar cane ethanol, which is cheaper per btu than gasoline. In fact, a great deal of the poverty in island nations like Cuba and Haiti is directly attributable to low sugar prices. Sugar cane ethanol can change that. Rising sugar prices driven by the increasing use of sugar for fuel open up a potential win-win solution for everybody. As Newsweek writes (Aug. 8, 2005):

A global biofuel economy, with a division of labor favoring the most efficient producers, is key to developing biofuels as a viable alternative to oil. For many developing countries, year-round growing seasons and cheap farm labor are a valuable competitive advantage over cold, high-cost northern countries. Super-efficient Brazil now sells ethanol at the equivalent of $25 a barrel, less than half the cost of crude.

Ideally, the solution will involve developed countries transferring simple, modular, nuclear technology (like the pebble bed reactor) to the islands so they can keep their power grids running, while the islands focus on producing sugar ethanol for export. Even if the islands are only supplied with NG or clean coal, their sugar production infrastructure is a smooth way to turn other energy forms into liquids, while making the islands more prosperous.
-- by JD

One advantage the 3rd world has is they don't have a long way to fall. I don't mean to sound heartless about it, but there social and economic fabric, being less industrial/suburban, is fundamentally less oil dependent. Not that there won't be wrenching adjustmens, emigration attempts and other problems, it's just they are closer to a simpler lifestyle. I remember being on vacation in Jamaica watching these guys fishing, living on the beach in little corrugated tin huts. Much better off than the McMansion crowd stuck in gridlock.

Yep, they be screwed!

An agricultural scientist in the biofuels industry spoke last month at our university. He theorized that the principal problem with peak oil will be food production. He said that biofuel technology will get so efficient and cheap that we will wonder why we didn't start looking to sugar cane and palm oil for our fuel needs decades ago. He argued that deforestation and the diplacement of food crops to produce biofuel will be the most critical humanitarian crisis in the developing world in the coming decades. He predicted that despots would rise to power in the developing world and would grow rich off the proceeds of palm oil biodiesel while thousands starved because farmland had been reappropriated. An interesting twist on the "doomer" perspective from someone in the ag business.

That's going to be 600,000 jobs in total when you account for the jobs dependent on auto manufacturing.

"oh, the factories will just be retooled for other things" jd will say.

Ah, no they won't dumbass.

GM and Ford are cutting jobs because they suck and can't compete. If they could manage to make cars that people want to buy, they wouldn't be in this predicament. Manufacturing across the country has been in decline for decades across this country, and what has happened to unemployment? It's far lower than when unions were at the peak of their power. In today's world it is better to have a masters degree than an uncle in the UAW. The only people complaining about that turn of events are those that can't cut it.

Why do people keep connecting peak oil and the GM/Ford layoffs?

Japanese car companies are doing just fine, GM and Ford's problems have nothing to do with peak oil (BECAUSE SUPPLY IS STILL GROWING WE HAVENT PEAKED YET), they have to do with bad management and the fact that nobody wants to buy their cars.

While the Japanese were spending R&D budgets developing better gas mileage and investing in hybrid and full electric car technology, GM was spending it's R&D budget on putting DVD players in their vans. The people who were fired will get other jobs, maybe not paying as well or with crazy benefits (that was another part of the problem), but they'll find other work because the economy is booming right now.

That's going to be 600,000 jobs in total when you account for the jobs dependent on auto manufacturing."

This is a myth, japanese car companies presence is expanding in the US and will cover the gap, 60,000 jobs have been lost, no more.

If sugar cane based ethanol holds such promise, then why did the Cubans not develope this fuel when they lost their oil imports from Russia in the 1990s? Regardless if you like Castro or not, one has to admit that Cuba is a pretty well-run country with high levels of science & research. I would think the Castro government would have liked the idea of becoming energy independent on sustainable ethanol production. This would be good imagery for a communist leader who cares so much about that. So why didn't the Cubans go ethanol? Does anyone have theory?

It appears that Cuba does not have the infrastructure to convert sugar to ethanol, and has not had the money/materials to build it.

"As in the case of sugar refineries in Cuba -a country with a very large sugar sector- has a very small alcohol distillation industry with limited production capacity. This in part is due to Cuba's role as a supplier of raw sugar within the central planning scheme of the Soviet Union. Cuban raw sugar was refined by the Soviets, in Ukraine sugar beet factories during their off season. Fuel alcohol would give Cuba some margin of domestic fuel independence.
There is speculation of possible alcohol strategy that could involve a triangular venture whereby: Brazil would supply Cuba the technology and the distilleries; Cuba would produce fuel ethanol from sugarcane for shipment to Mexico and the latter would pay for the ethanol directly to Brazil with oil and thus pay off Cuba's debt."
http://lanic.utexas.edu/la/cb/cuba/asce/cuba2/nick.html

"So why didn't the Cubans go ethanol? Does anyone have theory?"

Yeah, I have a theory and that is because sugar-ethanol is like any fermented biofuel: a joke. There is no way in hell that the entropic waste product of an industrial fermentation system can power that system, much less the society that maintains it. Get real you energy yokels! This is thermodynamic voodo! We might as well try and import methane from titan, JD. ha ha ha

I agree with the posts that japan's automakers are booming in the US. I can also tell you why, hybrids... GM, to my knowledge, has few hybrids on the road. Toyota has 3 hybrids running on the road, the Prius, Camry, and the Highlander. Honda also has a few, namely the Insight and Civic (awesome car, i test drove one). They do have the Accord hybrid but they're not going to make it anymore. I think also that Honda has a hydrogen car coming on the market in 2008. Ford only has one hybrid, the Escape. So thats why I think GM and Ford ain't doing so well. People want cars that get great milage, and ford and GM just don't do that. Saturn has a hybrid out (not sure if they're owned by GM) Nissan doesn't yet, but they have 3 cars that get 30+ mpg.

The problem with GM and Ford is not a global one (these are after all multi-national corporations) but a purely American one (Ford and GM cars produced outside North America aren't too bad), and the cause is health care costs.

The cost of paying for health care (both for current workers and retired workers) amounts to roughly $1500 per car. Outside North America, these costs are paid by the government, not by the car manufacturers.

This means that the American operations of Ford and GM can only make a profit by selling oversized gas-guzzling monstrosities (as their purchase price is much higher than that of more reasonable cars).