Just a little over a month ago Rep. Roscoe Bartlett (R - MD) wowed everybody at the ASPO USA Peak Oil Conference with his heartfelt defense of future generations. Here's Stuart's star-struck report from the Oil Drum (I'll quote it all so you can get the full emotional impact): Next came Roscoe Bartlett ("I'm a conservative Republican but I try not to be an idiot"). Roscoe didn't tell me anything I didn't know, but he said it so well that I don't mind admitting I was in tears by the time he stepped down amidst a standing ovation. So was Dave, just to prove I wasn't the only girlie-man in the audience.

The gist of his presentation was that we cannot continue growing exponentially in a finite system, and we should not try and "fill the gap" between post-conventional-oil-peak supply and demand, because the higher we manage to get supply by the time we do peak in all liquid fuels, the worse we as a civilization are going to crash afterwards. We need to figure out how to have a high standard of living while using less and less energy. We must be focussed on how to move to renewables as quickly as possible before we terminally mess up the planet. He opposes drilling in ANWR - he's been there and he doesn't think the environmental impact will be that bad, but he doesn't think when we have such tiny reserves as a nation that it makes any sense to use them up as fast as we can. He uses as a running example the contrast between Easter Island (where the inhabitants of a fascinating civilization ended up "living in caves and eating rats and each other"), and the Apollo 13 mission where by acutely careful energy and resource rationing and cooperation, the astronauts managed to eke things out and get home safely.

What kind of world are we leaving for our grandchildren and greatchildren? What will they say about us - what terrible people we were that we used up this rich endowment in such a short time?

I think what is so incredibly inspiring about Roscoe is that he's speaking his truth straight from the heart without the slightest concern about whether anyone's going to approve or not. These things desperately need saying, and he's going to say them and damn the short-term consequences. The normal slippery politician spin-shit is utterly missing from the man. He's a hero, or at least he's now mine.

Yah, that Roscoe's really something. The real deal, sniff sniff. Until today when he voted to drill ANWR.

Here's the report from AP:

House lawmakers opened the way for oil drilling in the Arctic National Wildlife Refuge as one of their last acts of an all-night session Monday bringing their legislative year to a close. [...] The ANWR provision was attached to a major defense bill, forcing many opponents of oil and gas exploration in the barren northern Alaska range to vote for it. The bill, passed 308-106, also included money for hurricane relief and bird flu preventive measures.Source

Aren't politicians a bunch of filthy double-talking swine? Hey Roscoe, here's a little message for you from our great-grandchildren: 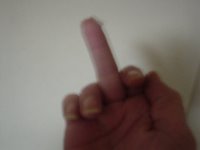 Dude you just so ruined your credibility with this post.

Bartlett changed his opinion probably, is that such a big deal regarding ANWR?

I don't think ANWR was going to save us anyway, sure it should be saved for when we really need it but honestly it takes years to get oil production online, by all accounts we will have already adapted or died by then (sunk or swam) after peak.

Anyone know when ANWR is going to peak if they started operations ASAP? as long as ANWR's peak is after global peak it wouldn't be such a bad thing.

half of you Anonymous guys say that about every JD post :P

I mean, if that's the case, what credability, and why do you guys keep coming back to say the same thing under the Anonymous guise?

1. the precedent it sets: i.e. getting more oil is more important than conservation, renewables/alternates, and other mitigation strategies
2. the way ANWR was connected to the defense budget is scary. sets a precedent for ALL bills of this sort to be passed in the same way

it's probably how the Patriot Act will end up surviving.

Typical spineless republican ... I really wish Mr. Bartlett was different, but he allowed himself to be whipped into changing positions by " the cat-killer" Bill Frist.

Why? This current administration has no credibility left. Vote with them, and expect to sink with their ship come 2006 and 2008...!

Is there a general way to make comments about POD?

I have a few thought but they don't specificly apply to one post here.

For example, I believe it is possible to powerdown, while not powering down.
Meaning a single person can drive 25 miles to work everyday alone in a 10 mpg SUV, or they can share a ride with a Co-worker in a 50 mpg car.

so hybrids, and the like have comfortable seats, a/c, and good sound systems right, where's the downside? 1 gallon of gas does the work 10 previously did?.......so if we were just more organized, i think we could cut consumption by 75% and still maintain a high standard of living, and a consumption that isn't
as prohibitive of substitution? am i insane here, if a family can do it, why can't a community, country or world do it?

If they put him in charge of the country we'd be set :P

Don't worry the RINO's will save ANWR

WASHINGTON, Dec. 21, 2005 (AP Online delivered by Newstex) -- The Senate blocked oil drilling in an Alaska wildlife refuge Wednesday, rejecting a measure that had been put into a must-pass defense spending bill in an attempt to garner wider support.

Drilling supporters fell four votes short of getting the required 60 votes to avoid a threatened filibuster of the defense measure over the oil drilling issue. Senate leaders were expected to withraw the legislation so it could be reworked without the refuge language. The vote was 56-

For example, I believe it is possible to powerdown, while not powering down.
Meaning a single person can drive 25 miles to work everyday alone in a 10 mpg SUV, or they can share a ride with a Co-worker in a 50 mpg car. 1000% more efficient......right? so hybrids, and the like have comfortable seats, a/c, and good sound systems right, where's the downside?

And fertilizer can be made from coal (of which we now have 4 trillion tons!)
And goods and tourism can shift to trains.
And people can eat more healthy local food, and live a bit more like the Danish
And, for the long term, technological progress and virtual reality and solar cells is increasing in speed

Get into "solutions mood" and you can see straight through the doomer hype. Not to say that adjustments to new conditions won't be without effort and difficulty, but the world is changing all the time.

Let's get over the stupid doomer complacency and pontification, and focus on helping the poor of this world who will really be affected things like fertilizer price rises.

Oh wait, the poor are "a cancer on the Earth", or something, and we shouldn't help them because letting them die is more humane, and so on. And super-efficient cars require energy to make, and we don't have any. Where the hell do these people come from?

God work, Anonymous — nice to see that someone can see through the hall of mirrors.

This is one funny ass blog here, why is that. Well 'cause Matt Savinar cites him, just because Bartlett cites Savinar. Well so much for that Jevons paradox, right? Or maybe Bartlett voted yes in an effort to speed up the process. His speech about grandchildren!?!?!?! give me a break. If he really believes Savinar and all the doom hype, then we won't really have to worry about "explaining" it all to our grandchildren, will we?? At least 5 billion of us, right?