As reported on Feb. 28, 2006 in an article in Resource Investor, Lord Browne (the head of BP) had some interesting things to say about peak oil recently:

“[Peak oil] is a myth you will find reinforced in most newspapers every day… [that oil and gas are running out, and that we are walking towards the edge of the cliff.] I went into one bookshop here in London and found that there was a special display of 14 different books published over the last year with titles such as 'The End of Oil' and 'Twilight in the Desert.' The idea that oil is running out is simply untrue. There is no physical shortage of oil or gas. The reality is that the physical resource base is strong, and the amount which we can recover from that base is being expanded by technology all the time," he said.Source

Note, however, that Lord Browne is not saying everything is hunky-dory. He says we have a serious problem. The problem is not that we are running short of oil, but rather that the countries which do have large volumes of oil (particularly Saudi Arabia, Russia, Iran and Iraq) are sitting on it. As he puts it:

Unless the geologists succeed in finding new and so far unidentified provinces…we will all be dependent on supplies from just three areas – West Africa, Russia and, most important of all, the five states around the Persian Gulf, led by Iran, Iraq and Saudi Arabia.

The resources on which we are going to rely are closed to investment by any private company. The decisions on investment and production are controlled by Governments…which may not always be aligned with the interests of international consumers. (Source: same as above)

It's pretty easy to read between the lines here. Essentially, he is accusing these countries of being monopolists, engaging in anti-competitive practices in order to milk the wallets of their consumers. Now, Iraq obviously can't be branded with this label due to the war. They're sitting on their oil, but it's not their fault (or at least not the fault of the Iraqi government). So let's leave them out of it.

Let's look instead at Saudi Arabia. The country (like Iraq and Iran) is literally covered with oil fields which have already been discovered, as you can plainly see in the following maps from the USGS. Each green dot indicates an oil field, and the vast majority of these fields are undeveloped, just sitting there, idle under the sand. (Click to enlarge): 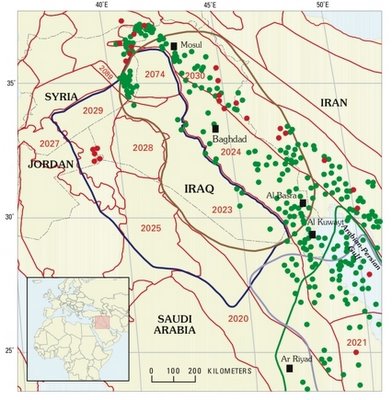 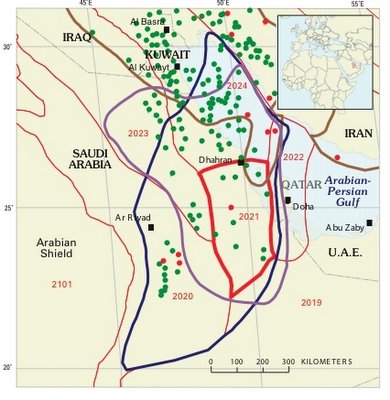 So the question is: Why don't these countries open up to foreign investment, so companies like BP can get in there and pump that oil?

I think we all know the answer to that question. They don't do that because they are monopolists, and they can make a lot more money by loafing and letting the price rise. It's classic cartel behavior. They don't want anybody else pumping their oil for the same reason that Disney doesn't want anybody else selling their movies and Mickey Mouse paraphernelia; they'll get undercut by more efficient competition and they won't be able to exact their monopolist's royalty.

Of course, the peak oilers have a different view of this situation. They say Saudi Arabia, Iran, Iraq and Russia are all tapped out, running at capacity. We are at peak and it is geologically and technically impossible for these countries to increase their oil production further. But if that's the case, then what do they have to lose by opening up to foreign investors like BP? The majors will just move in, waste a bunch of money trying to produce oil which isn't there, and leave. I don't get it. What are they being so protective of, if there's nothing there? 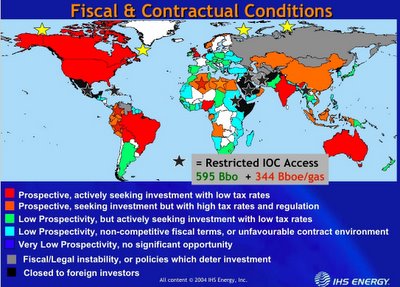 Source: IHS Energy
"From 1995 to 2004, fewer than 30 new wildcat [exploration] wells were drilled in Saudi Arabia, compared with more than 15,700 in the United States."Source
That sounds like loafing to me.

Venezuela: They have heavy massive heavy oil deposits just like Canada. But Canada's production is on-fire, going up every year because it is open to foreign investment, and the investment is pouring in. Venezuela, on the other hand, is discouraging investment, and making frequent threats to stop supplying oil. That also sounds like loafing to me.
-- by JD

Are monopolists really a bad thing? A few political-economic-induced price hikes wouldn't be a bad thing at all. They'd help the renewable energy industry and slow consumption, delaying the geological peak. I think the more expensive gets before it actually peaks, the better.

I am so delighted that someone actually acknowledged that they could be holding out on us.
And Roland, I agree, hopefully one day
these cartels will find themselves with an obsolete product.

In my opinion, no country is under any moral obligation to sell their natural resources cheap. Especially not to Western countries that charge high prices for intellectual property rights...

At the same conference where Campbell disclosed some of his methods to me, there was a professor Douglas Reynolds, from Alaska, who presented his studies, showing that anything short of all-out liberal access to resources will result in lower and earlier peak production. I guess that seems logical.

If this is true, I think it is good news. We are better of in a situation when peak and decline is not determined by geology, but geopolitical factors.

JD, I have been wondering for a while now, why you seem so eager to discredit all the prominent PO proponents. You describe yourself as someone who believes in PO (everyone who does not think oil production will peak is delusional), but anti-doomer. From my chair, you seem just as biased in terms of choice of sources and the credibility you assign to your sources, as PO/doomer proponents...

Thomas, I appreciate your frank comments. I don't have time at the moment to reply in detail (although I will tomorrow). In the meantime, let me ask: What was about it the sources used in this post, or the credibility I assigned to them, that you found biased? I honestly would like to know where you felt there was bias.

Why the hell should these countries not monopolize their natural resources, as opposed to giving it away quickly to Western economies (who are going to just waste it in cars). It's their stuff and it would be in their national interest to husband the resource. And if we in oil squandering USA don't like it we should grow switchgrass or biodiesel and see how easy it is to clog freeways on this wonderful array of alternatives.

When I read these comments by Brown and others, I see the big implication as this: these countries are denying us "our" oil so we should invade in order to impose the neoliberal model for resource allocation there. It's totolitarian to nationalize a resource, so we need to send down our guns for the fight of freedom. If peasants in Venezuela are keeping cheap gasoline from our Hummers in the suburbs, then we'll have to send our Hummers down there and "liberate" that oil.

I think some of you are missing the point of this post. JD isn't making any sort of value judgement about how these countries develop their resources. Rather, he's pointing out the danger in inferring a depleted resource base predicated on published discovery and production numbers.

A lot of people are just upset for having been taken in by the PO doomseekers. If JD points out that their numbers are wrong, they hit the ceiling. Some people only want bad news.

I think this is something that separates the optimists (anti-PO) to the more pessimists (PO is real). It may or may not be that PO is all that bad or would have a bad effect on our economy. We have always seem to have adjusted to our situation pretty well. It might not go perfectly, but the world on a whole could get by past PO. However, that outcome relies on a perfect world, in which companies act according to the best interests of the people. Does that happen? Or do car companies continue to push gas-guzzlers when they could easily (as many POers believe) produce much more efficient vehicles? Well, go outside and see the vehicles. Even if business didn't impede, then the fault lies on the consumer. Still no good to our situation.
Or POers realize that while oil may not geologically peak for quite some time, they do realize that it is unlikely to increase (or at least keep up with demand) because of the War in Iraq, OPEC (as JD notes), and other wars, cartels, tensions, etc.
The reason I side more with the pessimists than the JD's is because we don't live in a perfect world. People make idiotic decisions like live 50 miles from where they work. Destroy mass transit. Buy shitty gas-guzzlers. Monopolize the energy market.
In a perfect world, or even halfway perfect, we could get by with just inconveniences. I, as well as many other, just don't think that the world we live in and the business/consumer practices just aren't that great.
(This is my first post, so it's more about my views on the PO debate than just this article.)

But I think that this blog shows how unbiased he is. This actually supports PO and how it could happen very soon, since new exploration is limited to regions that have already been thoroughly explored.

You do not need to have monopoly power to hold production at a lower than the maximum level. As any resource economist can tell you, if you anticipate much higher future prices you should hold production down. If money today is worth 3% more than money one year from today (real dollar inflation adjusted) and you anticipate higher future oil prices, so that you can make more than 3% more selling the oil one year from now then you should hold back prodcution. There are other factors also (marginal utility, current needs, etc.).