The following Table and graph come from the DOE's Annual Energy Review 2004 (P. 298, 299). (It's probably best to open each of these images in a separate window to follow the explanation below. The data in the Table can also be accessed in HTML here). 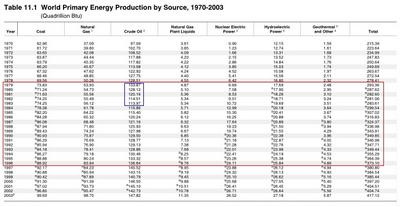 Point 1
First, refer to the Table and notice the figures (given in quadrillion btu, or "quads") in the crude oil column for the years 1979 to 1983 (indicated by the blue box drawn on the Table). World crude oil production dropped for 4 consecutive years:

Now, look at the figures for coal during that same period. Coal figures did drop by 3.5% in 1980, but afterwards they resumed growth. Total growth for coal over 5 years: +0.6%.

Natural gas grew steadily throughout the period (except for a slight drop in 1982 of about 0.1%), achieving a total increase of +4% over 5 years.

Geothermal and other boomed, rising +42% over 5 years.

Conclusions:
1. A severe drop in world oil production does indeed cause a drop in total energy, although the drop is greatly attenuated due to growth in other energy sources.

2. The doomers claim that growth of alternatives (like gas and coal production, or construction of nuclear plants) will be impossible in the post-peak period due to their dependence on oil. This clearly does not accord with the data. World nuclear power, for example, grew +60% as oil fell by -15%.

I've noticed that you don't mention the peak of natural gas, which is predicted to occur 20-25 years later than PO.

I think it would be a good idea to incorporate that prediction to your analysis.

Thank you, fernando. You make an excellent point. I am focusing mainly on oil right now, but I think often about peak gas and peak coal. In fact, I think those peaks present a much greater danger, and the seriousness of depletion could be better understood by focusing on them rather than the hype surrounding peak oil. In a way, peak oil is a red herring.

"I've noticed that you don't mention the peak of natural gas, which is predicted to occur 20-25 years later than PO.

I think it would be a good idea to incorporate that prediction to your analysis."

Seems that it's only five years later and not only is peak natural gas not going to happen in 20-25 years, but due to the hundred year glut of shale gas we have, it's likely that we could mitigate easily by swapping some transport to nat gas and the rest to electric, enough to compensate for any putative declines.

Sorry McPeaksters no cigar on this one.