The classic doomer soundbite: Peak oil will cause a massive worldwide die-off because modern agriculture is utterly dependent on oil for fertilizers, pesticides, agricultural machinery and transport.

Admittedly, it's a great soundbite. Very scary and plausible if you take it at face value. But -- to quote Baudrillard -- no truth can withstand being verified, and this truth is no exception. It falls apart under pressure. As we have seen:
Part of the power of the soundbite derives from the image it conjures in the mind. When the peak oilers say "agriculture is utterly dependent on oil", I bet you imagine something like this: 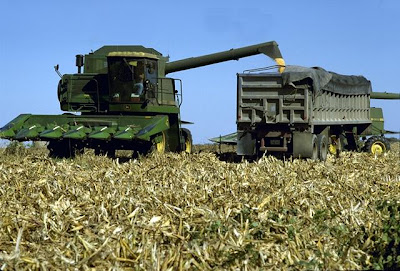 Heavy machinery spewing diesel exhaust. The big harvester-combine, mowing through the fields, blowing a stream of kernels into a transport truck. The operation definitely is oil-intensive. But there are ways of massaging that problem too, although I won't go into them today.

Today, I want to focus on another face of agriculture, one we are all familiar with, although we tend to forget when worrying about our "utter dependence on oil". It looks like this:

Remember these people? Yes, of course you do. In the U.S., they're called migrant farm workers, or illegal immigrants. It makes you wonder: Why does the U.S. need so many of them if their agriculture is utterly dependent on oil (i.e. mechanization)?

It turns out that, aside from grains (wheat, rice, corn), most of the fresh food you get at the supermarket is processed/harvested by human hands, not oil-burning heavy machinery.

The Center for Immigration Studies has compiled some interesting USDA-NASS stats on this phenomenon. In 1997, for example,
Check the stats for yourself. It's clear that many, if not most, fruit and vegetable crops have only a minor dependence on fossil fuel because most of the field work is done by people, not engines.

You could say the same thing for many meat and dairy products as well. Do you recognize this scene?:

Not much oil being consumed there. We certainly aren't mowing chickens into chicken parts with big oil-fueled combines. In fact, aside from transport and the oil inputs to chicken feed, most of the work on chickens is done in electric factories, or by human hand.

This is a fertile area of inquiry, and I've only scratched the surface. The take-home message: There are two segments of the modern agricultural system -- foods which are highly dependent on oil-powered machinery, and foods which aren't.
by JD

How do you think the food gets to your plate?

It's delivered by a convoy of whale-oil-powered Hummers driven by Chuck Norris.


But serial folks, here's one way to make fertilizer that doesn't involve industrial infrastructure (although biomass ammonia-char from eprida is really neat):

Next time you hear those kooks talk about soil erosion due to cellulosic ethanol (near 100% corn stover utilization) remember the above article. Unlike ROTTING stover, covercrops are living and "make carbon" every time a photon hits their chlorophyll. Not to mention all the mycorrhizal fungi which is nurtured over the winter which would otherwise die-back because they don't decompose rotting biomass (unlike their competitor microbes which displace them).

Oh yeah, and where do we think all the nitrogen and minerals go? They're just recycled in the ecosystem. In the future they won't be flushed down the toilet and then downstream.

Oh yeah, here's another solution so we don't need an army of Chuck Norri.

Those plastic sheets are much more simpler than the transportation industry and infrastructure needed to transport California tomatoes.

Oh looky, the ideas keep coming. If the world ends I assume we'll just spend an afternoon looking through Google for solutions. ;-)

Good to see at least one popular Energy related blog on the internet that's not crawling with doomers. I also enjoy the Energy Blog but lately the nay sayers are getting to be a real drag there.

Oil has been a jump-start for human industrialisation. Energy-rich, relatively cheap--a gift from the earth.

We will eventually fall off the cliff into very high oil prices. Eventually. There will be no single "peak". The many peaks crammed together stretch out to a plateau.

That gives us time to do what JD, syn diesel, and other forward thinkers are saying--think!!

So how do those numbers compare to the amount of wheat and corn grown and harvested with big machinery? And how many people would be needed if the big machinery were replaced by hand pickers?

Indeed, the world is already changing. It must be depressing for Peak Oil gloom-and-doomers that humanity did not, in fact, lose its adaptability with the advent of cheap oil in the 90s...

Unfortunately, the average American diet is currently pretty low in fresh fruits and vegetables. And while meat may be processed by hand, most of the grain produced is fed to animals. As (If) we shift away from these diets the need for cheap labor will increase. Although, I suppose if there is a large recession/depression there will be many idle hands to pick produce.