My ongoing ground-and-pound operation on peak oil agriculture scaremongering is having a salutary effect. My buddy cube over at doom central now informs me that:

I think there's a consensus here that phosphorus NOT nitrogen fertilizer is the weak link.

Yep, the doomers have thrown in the towel and moved on to the next fertilizer scare which, incidentally, has no connection whatsoever with peak oil. LOL. But let's check it out anyway.

For our purposes, the story begins with an Aug. 13, 2007 article by Patrick Déry and Bart Anderson called Peak Phosphorus. I'll give you the Cliff's Notes version here:

Phosphorus is a critical fertilizer we need to grow food, and the earth has only a finite supply. Like oil, someday phosphorus will peak, terminally decline, and run out.

Now, like all good peak oilers, Pat and Bart are ready to slap a Hubbert curve onto anything at a moment's notice to prove that everything in the world is peaking right now shriek shriek. So here's the money shot: 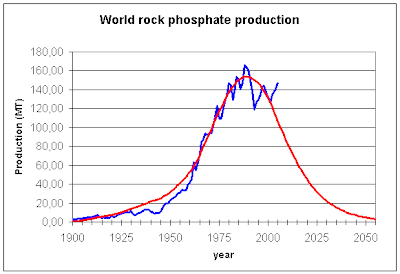 Fig. 1: Fasten seatbelt and brace for die-off
The article claims that worldwide production of phosphate rock (the source of phosphate; I'll call it "PR") peaked in 1989 although that is certainly a mistake because the USGS data(pdf) the authors rely on indicates a world peak in 1988 at a level of 166 million metric tons. Fixing that for them, let's evaluate the claim that PR peaked in 1988, and is now in terminal decline.

The Hubbert Linearization given by the authors shows a phosphate rock URR of 8 billion metric tons, as indicated by the green arrow: 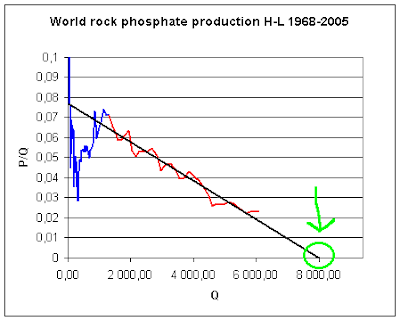 Current reserves are more than twice the claimed URR. So clearly this Hubbert-Linearization has been cooked for propaganda purposes. In fact, since cumulative production to date is about 6 billion metric tons, the area under the red curve in Fig. 1 is going to have to be at least three times larger than shown (6 to date + 18 reserves = 24). And that's just counting reserves -- i.e. phosphate which can be economically extracted with current technology.

I asked Stephen M. Jasinski, the USGS phosphate rock specialist, for his opinion on this matter, and he said: "Phosphate production has likely peaked, but reserves will last about 300 years with current technology." Apparently, Mr. Jasinski sees the reserve base figure of 50 billion tons as the more credible figure in the long-term, and that would make the area under the red curve in Fig. 1 seven times bigger than shown.

In conclusion, you can press the snooze button on "Peak Phosphorus".

Note) By an interesting coincidence, it turns out that asteroids are rich in phosphorus, and may in fact have been the original source of phosphorus for life on earth (Source). This presents the future possibility of asteroid mining -- a natural part of our human destiny as we grow beyond the earth and into the solar system.
by JD

So let me get this straight. You're saying that we shouldn't worry about Phosphorus peaking but then you're partially basing your conclusion from a source that says:
"Phosphate production has likely peaked, but reserves will last about 300 years with current technology."

So shouldn't the blog entry be retitled "Out of phosphorus? Hit the snooze button" since your reference is stating it probably peaked?

I'm not at all a doomer and really enjoy your blog. I'd like to suggest "peak lithium" as a potential future blog entry. I've read that lithium is recyclable so that's already a starting point. But I'm hoping there's more debunking potential on this subject.

Hi uf,
According to the USGS, phosphate rock production peaked 20 years ago (1988), and has now declined by about 16% from its peak value. Meanwhile world population grew by 27% from 5.1 billion to 6.5 billion in the same interval.

Clearly the phosphorus peak is nothing to worry about. It happened 20 years ago, and had no negative effects whatsoever on agricultural production.

Note also that PR production has been on a rising trend lately:

Hmmm, and is that rising trend going to affect your time estimates for the remaining reserves?

Remember the growth!
1% over one lifetime of 70 years = double the population (and demand for everything, including fertilizers).
2% growth = 4 times the demand.
3% growth = 8 times... etc. You get the picture.

JD, always remember the fact that the phrase "At current rates of consumption" is a completely misleading phrase, because there never has been such a thing since the industrial revolution, and unless we all pass through a demographic transition, never will be a true phrase. Consumption has always increased!

So even if your reserves statistics are true, I take your conclusions with a grain of salt.

I enjoy reading your posts and the comments. Allow me to make a suggestion. Enable a full date/time stamp for comments at the settings "Comments Timestamp Format". This allows the reader to get a chronological sense of the give and takeof the dialog. Just a time stamp alone really is confusing. Thanks.

How can anyone claim a good linear fit to that time series?!? That's simply ridiculous.

I wonder if organic farnmers will ever face peak manure.

Well if the doomers have it their way I'm sure we will. Ya' know once we all die off and they're the ones left over because they knew along that we would crash and they are the only ones with survival skills. Well once peak animals happens then shortly thereafter peak manure will occur, so because the doomers can't shit out enough to keep going and then another dieoff must occur so that the remaining ones can live off of their own poo. Sounds harsh and smelly! I'm glad I won't have the "edge" to survive for that one.

As for the blog goes.......to tell ya' the truth JD and everyone else, I've been hearing that we'll peak in everything. It seems to be the new fad as of late. You know in about 10 years we'll probably peak in lipstick and Gucci and clothing, not to mention we'll def. peak in toilet paper. MMMMM......can't you just smell the future, I can.

See the following on phosporus, we are run out cheap phosporus in 75-300 years. Much as we are currently running out of cheap oil.


While exploitable P
deposits have a finite life, it
does not mean that the U.S.
or other countries will run out
of phosphate rock at some
specific time in the future.
Reserves and reserve base do
not include resources, which
are not presently economically
recoverable. U.S. phosphate
resources are immense.
Onshore phosphate resources
for the Atlantic Coastal Plain
have been estimated at about
24 billion tons. Southeastern
offshore deposits are believed to extend from
peninsular Florida to possibly as far north as
the Grand Banks. As much as 200 billion tons
of phosphate resources may occur in the
Miocene sediments of the Continental Shelf
offshore Georgia. In the western U.S.,
resources less than 325 yards below ground
and that could be surface mined are estimated
at 28 billion tons, with more than 500 billion
tons at depths too deep for present mining
technology.

There is some mistake here! The fit of the logistic curve is totally inconsistent with the USGS data :)

I think the URR data of the USGS is questionable (as it is in the case of oil, natural gas, and soon..) and this is euphemism...

Wasnt the USGS report a 'Mineral Commodity Report' that deals with commercial mines and buying and selling of mineral resources? They probably state only reserves that are profitable to mine. If people are really dying for phosphorus they'll mine those unprofitable ones anyway.

I actually heard "peak phosphorus imminent" on the radio this morning. Doomer assholes polluting the airwaves with their assinine religion.

If you're worried about peak phoshorus, then instead of pissing in the pan (and thence into the ocean), piss in the compost.
Or... on an industrial scale all the Mexican farmhands could relieve themselves into the crops they are picking.
Problem solved.

Doomers have no imagination.

In this ABC (Australia) podcast from 6 May 2009, Dr Dana Cordell PhD scholar, UTS Co-founder, from the Global Phosphorus Research Initiative speaks on "Peak phosphorus: the sequel to peak oil" 18:42

From my study of the subject, a "doomer" is someone that believes Mad Max is inevitable. Peak phosphorus can be acknowledged and the MASSIVE challenges be explained as a risk mitigation excercise, and even some "if we don't do this" consequences spelt out, WITHOUT actually being a doomer. It's about risk mitigation.

I'm a peak oil optimist. For years I've been saying this blog should be called "Dieoff debunked" NOT peak oil debunked, because so many of the "solutions" JD goes on about are actually quite major economic and social challenges that many people will regard as quite awful. (Sleeping at work 5 days a week and saying goodbye to normal family life is a peak oil "solution" and is "easy"? Give me a break! JD's obviously not had a kid with cancer, or any real experience of parenthood. GROW UP!)

So according to the REAL experts on peak phosphorus, yes the answer lies in our pee and pooh. But just "peeing in the compost" as you so quaintly put it does not explain how that compost gets to the farmer who actually grows the food, does it? What percentage of our modern world actually does agriculture? How are we going to move all that compost to the farmer? Are you actually a 'doomer in disguise' arguing that we should all go back to an agrarian lifestyle because we have to "pee in the compost" and look after growing the food ourselves? Are you actually arguing that 80% of us have to "go back to the land"? See, you haven't really thought this through have you?

Try and be adult about this and stop just calling people names. Download the podcast, listen to it, think about the infrastructure changes required (while we ALSO hit peak oil at the same time) and you might actually learn something.

I'm not a doomer, but I'm also not going to the other extreme and going to treat these quite serious challenges as TRITE!

Eclipse Now,
As shown in this post, peak phosphorus is not going to be a near term problem due to the large size of current reserves. In fact, world production of phosphate rock (USGS stats) has been steadily increasing since 2001:

In the next few years we will be surpassing the previous peak of 166mmt set in 1988. I will then revisit this topic to show how absolutely shitty and pseudo-scientific the modeling of peak phosphorus by Dery and Anderson was. Of course, this will be no surprise to the readers of this blog because they read the analysis in this post, and that analysis is correct.

Peak phosphorus will be an issue at some point in the future, but not for the next 30 years. As I said, hit the snooze button.

Sorry, but I'm not going by those authors but by the University of Technology Sydney figures, and they insist that it RUNS OUT in 100 or so years but peaks much earlier.

I don't care about your cute little "snooze button", but what recognisable EXPERTS in the field say. You're not one of those. Grow up.

The UTS is currently predicting peak phosphorus for circa 2035. That's hardly a rebuttal of what I just said: "Peak phosphorus will be an issue at some point in the future, but not for the next 30 years".

If you want to get people stoked about a problem that won't even arrive until 25 years from now, be me guest. Blog til your fingers bleed buddy. I'm going to worry about problems that are actually relevant to me, like which hemorrhoid medicine is most effective.

Isn't it obvious that the "first" peak is due to the collapse of the USSR ?