257. U.S. DISCOVERS ANOTHER SAUDI ARABIA IN ITS OLD OIL WELLS

In 240. CLEANING THE PETROLEUM CRACK PIPE, I discussed EOR using CO2, and how it can be used to get more oil out of old holes we already know about.

The DOE issued a press release on this subject on March 3, 2006, and the figures are pretty remarkable. The DOE calls CO2-EOR a "game changer" and says:

State-of-the-art enhanced oil recovery with carbon dioxide, now recognized as a potential way of dealing with greenhouse gas emissions, could add 89 billion barrels to the recoverable oil resources of the United States, the Department of Energy has determined. Current U.S. proved reserves are 21.9 billion barrels.

The 89-billion-barrel jump in resources was one of a number of possible increases identified in a series of assessments done for the Department which also found that, in the longer term, multiple advances in technology and widespread sequestration of industrial carbon dioxide could eventually add as much as 430 billion new barrels to the technically recoverable resource.

Beginning efforts to develop the 89-billion-barrel addition to resources would depend on the availability of commercial CO2 in large volumes. If this oil could be added to the category of proven reserves, the U.S. would have the fifth largest oil reserves in the world behind Iraq, which has 115 billion barrels, based on present estimates; and an additional 430 billion barrels would make it first, ahead of Saudi Arabia with 261 billion barrels.Source

That last bit about surpassing Saudi Arabia is obviously a little too optimistic, but you gotta admire that chutzpa!

It does make you wonder though: If CO2-EOR can quintuple reserves in a played-out, running-on-fumes province like the US, what's it going to do to reserves in Saudi Arabia, or reserves world-wide, when it really catches on? The mind reels.

There is lots more interesting data on EOR (and other related phenomena) in the various reports referenced by the above press release, but let's focus in on one detail. This is the chart for already discovered oil in the U.S. (Source, p. 2): 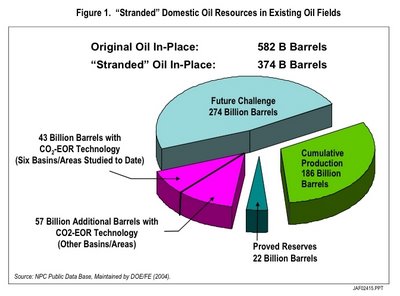 Let's compare this with Colin Campbell's country assessment for the U.S. from ASPO newsletter #23 (click to enlarge): 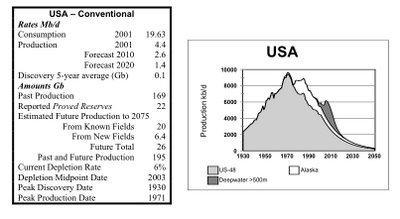 Hmmm... Looks like we've got a major SNAFU here. Campbell gives a total past+future production for the U.S. of 195Gb, while the DOE report gives actual past+reserves (to date) as 208Gb. And that's not even counting EOR. If we add in EOR, we get 308Gb. And that's just from existing fields. Undiscovered fields, reserve growth and U.S. oil sands have the potential to add 300Gb on top of that (Source: same as above, Table EX-1, p. EX-4). And even after all that, there'll still be 1,124Gb left in the crackpipe in the U.S. alone, so we can go after that with whatever funky technologies we come up with in the meantime.

On the one hand, U.S. production using conventional methods has been on the decline for a long time, but the production numbers are getting lower and lower, and that means it is getting easier and easier to reverse the declining trend. After all, you can't decline past zero.

On the other hand, we've got this new "game changing" technology, which is catching on and even now producing 660,000bd world-wide according to Oil & Gas Journal. So it looks to me like just a matter of time before the U.S. decline reverses, and we get a secondary EOR hump. Hopefully, Colin Campbell will live long enough to witness the glory of it all.

This further reinforces how misleading the "Growing Gap" can be. The U.S. hits on the idea of pumping CO2 into its old reservoirs, and bing: 7 and a half Prudhoe Bays worth of new oil appear. So where is Campbell going to put that oil into his scary "Growing Gap" curve? Well... probably... he's going to try to ignore it and downplay it for as long as possible. When that fails, he'll be like the Andrew Fastow of peak oil, desperately trying to squirrel it away in the past somewhere through "backdating", so the new discovery numbers don't exceed the expectations of the peak oil community and cause his theory to go bankrupt.
-- by JD
-----
Thanks to Jan-Willem Bats at Our Technological Future for the tip. Be sure to visit Jan-Willem's site and check out the totally amazing video clip of the "Robotic Pack Mule". It takes a lickin' and keeps on tickin'!!!

So basically liquify coal into gasoline, freeing up CO2, using that CO2 to get even more oil and turn it into gasoline. Many years of reserves left in the US for both of those sources. But there are a few problems that may arise or not. 1) How many tons of coal have to be liquified to produce enough CO2 to 'liberate' the trapped oil? 2) Can the rest of the world really use this same technique on a scale as large as ours as we have a good chunk of coal deposits? 3) How good of quality is the oil? Is it fairly uniformly heavy or sour or what? or is it over a broad spectrum of grades?

Very good news. We'll see if it ever goes through tho.
Any other sources of commericial CO2 that can be used at such massive quantities?

As someone who was completely taken over by peak oil for a while (I did learn how to garden organically so it wasn't a complete waste of time!) I am so pleased that you get stories like this one out into the public domain. Coincidentally the BBC have just published a story about the same thing happening in the North Sea (http://news.bbc.co.uk/1/hi/sci/tech/4786736.stm).
Keep up the good work JD!

the only problem with this stuff is that when the fields actually do become "depleted" there will be a MASSIVE falloff in production. none of the 2-8% per year that we would get with traditional extraction methods.

also, while this technology, once it comes online full force, will push the peak out greatly it can also have the negative side effect of slowing down efforts to produce alternate energy. assuming oil prices come down. hopefully they will not. keep in mind, alternative energy research is not done because the world is running out of oil, but because there's huge money to be won there; i.e. the price of a barrel of oil is the driving force there, not remaining reserves; keep the oil price up and the research will continue.

As long as the oil is still expensive to get at, and does not come out much faster than now, it sounds good to me. I am rooting for the long, long tail. Demand is not going down, just ask all the proto-commuters in Shanghai, so as long as supply stays fairly constant we can expect lots of price increases, which will make alternatives all the more attractive.

I wonder if anything like this has been tried with oil shale/sands.

Paul: I'm with you. The best situation is lots of remaining oil, that comes out slow but steady. Sort of like a "time release capsule" that rations out just the medicine you need, when you need it.

fergie: Great to hear from you again! Gardening is great. I'm a gardening/plant nut myself, and I'd garden for a living if I could. Unfortunately, the lovely woman who is the center of my existence doesn't like the country because of the BUGS!! So I'm a city slicker now...

A long tail would definitely be the way to go.

P.S. That mulebot is mega. Might be helpful for getting your shopping bags home after you've sold youor car. ;-)

This is some pretty amazing news. It’s looking like peak oil won’t actually happen for quite a while now. And as everyone has said, with steady high prices the incentive to research alternatives is strong. And given enough time, alternatives R&D, political and social drive to get off oil and general technological progress, by the time oil does eventually peak we should be in a situation to adequately deal with it. In fact it may even be possible to make a transition off oil before it peaks.

Oh, and that robot mule is way cool. It’s amazing how robotics is progressing.
Check out these creepy tree-climbing robots (with a video link) posted on the New Scientist blog.

One thing I'd like to know is: how C02 EOR efficacies are affected by different oil field geologies.

While it's all well and good for it to work in one geology, might diffrent geologies prove more or less worthwhile?

This comment has been removed by a blog administrator.

Even if these figures are true (and I doubt it because the DOE is so notoriously optimistic… apart from the Hirsch report, of course) let’s run the figures.

That’s if you keep ALL that oil for yourselves, as you will have to, while the rest of the world peaks and the economy hits recession.

And it’s if you have all the billion dollar hydrogen cracker power plants you need to actually process the SOUR crude at the bottom. Remember, not all oil can be processed in the same type of refinery!

It is an interesting development and one we will need to measure out the oil — just like the medicine analogy above. But am I breathing easy yet? Not when George Bush can get up and say that “America is addicted to oil” and then retract the whole thing the next day.

Keep us thinking JD, but I still think the crisis is bigger than you portray.

"Keep us thinking JD, but I still think the crisis is bigger than you portray."

I would disagree with that. JD's clarified his stance on the reality of PO a number of times in response to POD slags on his character, which--as I understand it--is that PO has the potential to either annihilate mankind, or present the key to a more intelligent future.

The crisis itself is monstrous. As anybody who's gone through mental crashdown while trying to wrap their mind around the ramifications can attest--with or without a gun in their mouths--it's almost too big to get one's head around. The amount of unknown variables are so profound that it's enough to make you go half fucking crazy with worry and the urge to horde.

But I think JD knows this. He just chooses to focus on potential stopgaps and notable issues within the scope of the equation. Which I would frankly rather immerse myself in while preparing for the worst, rather than live out the next few years (BEFORE THE FALL) in morbid horror for my loved ones.

OT, though, I find myself fencing the benefits versus the downside. Anything that the government or oilies can spin into being a phony solution for PO (We've found a cure!) takes some of the urgency off of the issue, IMHO. Fifteen years of bought time doesn't mean a hell of a lot if your average cud-chewer doesn't get off their ass and start making changes on a personal level.

So what's happening with CO2-EOR? Is it happening? Is it practical on the scale required? Anyone?

Disclaimer: I am not a Reservoir Engineer or petro-scientist of any kind. However, I did work extensively with those who are in the great Prudhoe Bay oil rush of the early 80s. They were talking quite a bit about EOR, its promise and limits including CO2 back then. I don't remember it being nearly as magical as you present here. What has changed in the meantime?

Assuming this is real exactly why would we not be hearing about this everywhere with a major corporate and political push to get it done? Something is fishy here and I am too old to believe in a conspiracy to pauper ourselves and make us dependent on Middle East nut jobs.

This article in no way debunks peak oil. Peak oil is a fact that is tacitly acknowledged in this article.