The March 28, 2006 New York Times has an article (behind the free registration wall) on the oil situation in Russia, particularly the Timan-Pechora region.

In the USGS World Petroleum Assessment 2000, Timan-Pechora is Province 1008, and this is the map (green dots are oil fields and red dots are gas fields): 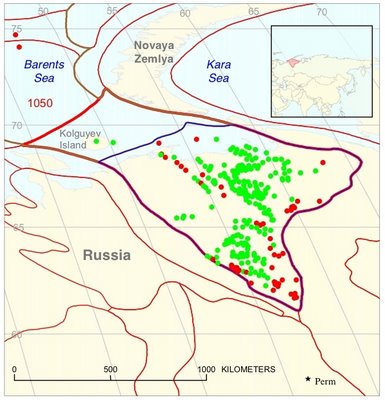 WPA 2000 ranks Timan-Pechora as the 26th province in the world in terms of undiscovered oil, with the following stats as of 1995 (MMBO, except for maturity):

This basin is far from peaking, and produces the sort of light crude which is in high demand. So why isn't production in this province booming?

The answer is one we have previously addressed in 253. MONOPOLISTS SITTING ON OIL. From the NYT article:

Despite its remote location in the far north, Usinsk has some inherent advantages. An export terminal a few hundred miles away on the Arctic Ocean could supply tankers able to reach the United States in nine days. Building a pipeline to Europe would feed the high-quality oil directly to another ravenous market.

But for now, the Russian government controls exports. So instead, oil from here is pumped into a maze of state-run pipelines stretching far to the south, where it is blended with inferior oil and sold at a discount.

Hard to believe, isn't it? Russian bureaucrats are blending caviar with slop, and selling it as dogfood. Which, as a side-effect, just happens to eliminate any incentive to produce the caviar.

Another interesting fact from the article: Siberia is covered with natural gas flares. There aren't enough pipelines and the gas can't be moved, so they just burn it. Rosneft alone flares enough gas in one year to supply an entire city the size of Denver.

I'm confused JD. You claim that we can easily adjust to PO because of the vast resources of the planet, not just hydrocarbons. Many PO'ers believe this as well, including me. But the problem though is not the ability, but just the liklihood of this happening because of the structures around the world. Russia has a lack of infrastructure, OPEC's cloak, other unwilling governments, our politicians are only concerned with elections (any alt program benefit takes too long to notice for a Congress to get the benefit), stubbornness of the people, etc. This is what separates 'doomers'(of all varieties) from the 'debunkers'. It seems as though we just acknlowledge the problems that exist outside of PO, while you just seem to discount them and think once the shit hits the fan, the politicians will tell us the truth AND then the people will get going with the good stuff (wind, conservation, ...). Am I wrong on any of that?

Good post though. Kinda helps both sides. Shows we have no influence (even high NG prices won't develop the region), but also lends a pretty nice hand after the peak since it's pretty easy to develop and transport.

Politicians are never going to tell us the truth, people are stubborn etc. etc. So what? That's not going to stop me. I'm not concerned with the likely outcome. I'm trying -- in my own small way -- to make my vision of the future come true, no matter how unlikely it is.

Then what exactly do posts like these have to do with making your little future happen? It's just trying to play whack-a-mole with moles that are outside of your armlength (politics, economics, public, etc). Why not then just focus solely on the tech that can help us instead of PO ties to racism, idiots like Kunstler? I could feel alot better about myself by not going to work and instead debating politics with 3 yo's, but that's not going to put money in my pocket.

nick, I post on gadgets from time to time when I get the notion, but this blog isn't about gadgets. It's about debunking peak oil. Oil in Russia, peak oil racists and Jim Kunstler are all part of that. If you don't like it, get off your ass and make your own blog.

I think I get it JD. The Doomers have thrown all manner of munitions to scare us into submission and indecision, from politics, to resources and downplaying tech solutions, and basically I think they move and you countermove. I think you do a pretty spot on job, I enjoy your site and it has put me onto more that a few interesting subjects that I have looked into further. Anyway, enough sunshine up your skirt, keep up the good work.

I've been to Russia and I've known it a little bit. Maybe my words are off the topic but the Russian government is not going to change their ways as long as it brings them revenues. And they never tell you how it brings them money.