Continuing from the previous article, let's look at the next area where the USGS estimates a lot of undiscovered oil: Greenland.

Oil is found in sedimentary basins, so let's look at the basins of Greenland. This map is from the Geological Survey of Denmark and Greenland (GEUS) (click to enlarge, or open up the pdf): 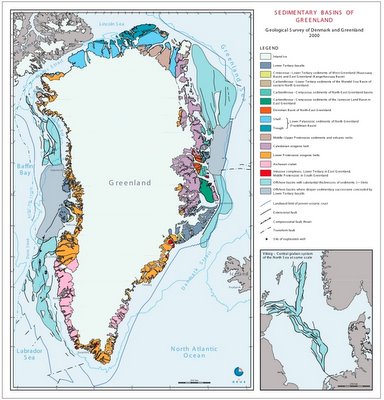 This is a huge unexplored area. Notice the inset to the lower right, next to the map of Greenland. That inset shows the relative size of the sedimentary basins of the North Sea, drawn to the same scale. According to GEUS: "Total area of sedimentary basins with petroleum prospectivity exceeds 350,000 km² (135,000 square miles). Total seismic data base c. 110,000 km, but coverage uneven. Only 6 offshore wells and 1 onshore well drilled, all in West Greenland. Large areas still untested." Source

There is no doubt that there is oil in Greenland. There are widespread oil seeps and shows in the west (Source) and extensive bitumen showings in the Franklinian Basin of northern Greenland Source. In the Northeast Greenland Shelf Rift Systems Assessment Unit (AU 52000101), the assessing USGS geologist (M.E. Henry) noted the similarity to North Sea geology, and the presence of four exhumed oil fields (which are now bitumen). He gave 1.0 as the probability that a 20MMbarrel field exists.

Here's the data on the geological characteristics of 52000101:

DESCRIPTION: This assessment unit includes the continental margin off eastern and northeastern Greenland and is almost entirely offshore. The eastern boundary extends to the approximate position of the boundary between continental and oceanic crust, the northern boundary separates this province from the Wandell Sea Basin, the southern boundary is placed near lat. 70 N. and the western boundary is drawn to include the nearshore deep sub-basins on the shelf that have been interpreted from geophysical data.

SOURCE ROCKS: The principal source rock for this unit is expected, primarily by analogy with the Norwegian shelf and the Viking Graben of the North Sea, to be Late Jurassic shales of the Hareelv Formation. Other potential source rocks probably exist in the unit and include, in order of expected importance, the Upper Permian Ravenfjeld Formation, Upper Carboniferous lacustrine shales, the Lower Jurassic Kap Stewart Formation, and other Devonian and Triassic beds.

MATURATION: Little published data exits in the offshore area regarding thermal maturity of these likely sources. Considering the probable depths of the source rocks in the numerous subbasins that exist on the shelf, which are as deep as 10 km, thermal maturity for petroleum generation must have been reached at least locally in these depressions.

MIGRATION: Because of the nature of structural deformation in this unit lateral migration may be rather limited but vertical migration could have been important.

RESERVOIR ROCKS: Principal reservoir rocks are expected to be sandstones of the Middle Jurassic Vardekløft and Olympen Formations. Other important reservoir units include carbonate build-ups in the Upper Permian and sands of the Lower Jurassic Kap Stewart and Neill Klintner Formations.

TRAPS AND SEALS: The system of fault blocks, rotated generally landward, lead to the expectation that major traps are likely to be found in the uplifted side of the blocks and that faulting will be important in trap formation. Overlying shales will form top seals for many traps.

Here's Colin Campbell on the subject of Greenland:

In, for example, the famous case of little known NE Greenland, the study states with a straight face that there is a 95% subjective probability of more than zero, namely at least one barrel, and a 5% probability of more than 111.815 Gb (billion barrels). A Mean value of 47.148 Gb is then computed from this range, being incorporated in the global assessment. Can we really give much credence to the suggestion that this remote place, that has so far failed to attract the interest of the industry, holds almost as much, or more, than the North Sea, the largest new province to be found since the Second World War?

This is completely lame as a rebuttal by a geologist. He speaks of the remoteness of the area, but that's not a geological argument. Remote places can have oil too. He also speaks of the lack of interest by oil companies, but that doesn't prove anything either. Oil companies ignored the North Sea for about 100 years, and it had oil. Their lack of interest may also have something to do with this:

The climate along the east coast is greatly affected by the East Greenland polar current which causes the creation of metre-thick ice cover to form during the winter half. During the summer half, huge ice masses from the Polar Basin drift down along the coast and south of Cape Farewell. These ice masses, known as the field ice, create huge problems for shipping. Source

The bottom line is this: Colin Campbell has criticized the USGS estimate of undiscovered oil in Greenland, but presented no geological reasons to rebut those estimates. He's just waving his hands and spouting a bunch of empty rhetoric. The evidence shows there is oil in Greenland.
-- JD

The Greenland has all the necessary geological components for forming petroleum, except for one thing. I will tell you what is missing.

Remember that fossil fuels are just stored solar energy by ancient biomass? Also remember in textbook geology teaching, the Greenland was located right at the North Pole, and only recently drifted a bit to the south.

Deprived of sun shine half of the year, the North Pole simply is not a place for prosperious growth of plantations and marine life forms. Therefore it is unsuitable for formation of fossil oils. Remember the energy contained in fossil fuels has got to come from some where. Without sun shine you have no where to obtain that energy.

Big oils are not dumb. If there is perspect of rich oil in greenland they would have been doing all the exploration already. The environment condition really should not be a limiting factor. On the other hand, if it is a limiting factor, then it remains so today and so even if there is oil, it's irelevant because it remains in-accessible.

Anybody else here think old man campbell could bitch-slap the tar out of this young punk?

NE, you are being very hard on quantoken, calling him a young punk.

NE, if you really know anything at all about your claimed field, why are you not discussing prospects for advances in fission technologies? You seem to be a doom-seeker who calls himself an engineer. Engineers don't typically go outside their fields and claim expertise. Engineers like to talk about their fields of expertise. What is your story?

NE, tone it down and discuss substantive issues. Further comments of the sort you just posted will be deleted on sight. Thanks for your cooperation.
JD

Sorry, was referring to JD. No offense intended quantoken

I don't know much about tectonics, but I thought Europe and Greenland were much further south back in the Jurassic. Check out these maps of Gondwanaland:

P.S.
You know, all the disruptive people this blog is attracting obviously says something about the maturity of a lot of doomers.

NukeEngineer, your eloquence and maturity astound me once again. How about instead of coming to us with your pompous, witless hero worship, you present a few facts.. or, more realistically, anything that may actually pertain to the discussion.

"My scientist can beat up ur scientist!!11oneone"

Seriously, I'd really like to know some more about Greenland. According to all the maps I've found of Laurasia (Jurassic Period), it was right on the equator, quite a way north of the Middle East. Then it drifted up further north.

I know very little about tectonics and geology, so I'd love to know if anyone can prove Quantoken right or wrong on this one.

roland, it's just another quantokenism (i think his "facts" deserve their own noun, from now on lets call them "quantokenisms").

first off, it spent a lot of it's history (post complex life) near the equator:

greenland during the devonian

greenland spent 100s of millions of years near the equator, covered in lush forests, bountiful life, and coal swamps before what is now north america and greenland finally drifted north around the triasic era.

not to mention that the global climate changed over the many millions of years, for example, here's what wikipedia says about greenland in the paleocene

i'm not saying this means that there's oil in greenland. just really getting fed up with quantoken's comments siting no sources and passing themselves off as fact.

as to nukeengineer, for someone who thought this blog was run by teenagers he sure is acting like one :D

Hey wow, thanks for the sources Popmonkey. I guess that means Greenland really was Green after all! :-)

Greenland is indeed still green, at least for some parts of the year (I live in Greenland). It was named (so tells the story) by the danish Viking, Eric the Red, who arrived in the southern part of Greenland during summer where it indeed is green. They even started farming and agriculture, but left as the weather later turned cold.

The oil-question is now again brought up by the media, and a recent survey from US geological survey has stated that the eastern part of Greenland contains as much as 110.000.000.000 barrels of oil, but lets see what the future brings

The story I heard is that Eric the Red named Greenland even though it was covered in ice so he could have Iceland (which i've heard is actually green) to himself. But on the oil part, I also do think that Greenland holds alot of oil. Whether its economical to go searching for it right now is one thing, but I'm sure that if there is a slight chance of Greenland holding a huge amount of oil, the big oil companies will sniff it out soon enough

In prehistoric times, Greenland was home to a number of Paleo-Eskimo cultures. From AD 984 it was colonized by Norse settlers in two settlements on the west coast on the fjords near the very southwestern tip of the island. They thrived for a few centuries, but disappeared sometime in the 15th century.[3]

The name Greenland comes from Scandinavian settlers. In the Icelandic sagas, it is said that Norwegian-born Erik the Red was exiled from Iceland for murder. He, along with his extended family and thralls, set out in ships to find the land that was rumoured to be to the northwest. After settling there, he named the land Grænland ("Greenland"), possibly in order to attract more people to settle there.[6] Greenland was also called Gruntland ("Ground-land") and Engronelant (or Engroneland) on early maps. Whether green is an erroneous transcription of grunt ("ground"), which refers to shallow bays, or vice versa, is not known. It should also be noted, however, that the southern portion of Greenland (not covered by glacier) is indeed very green in the summer and was likely to have been even greener in Erik's time because of the Medieval Warm Period.

There could also be a lot of oil in the ocean north of Iceland.