Peak oilers often dismiss the USGS World Petroleum Assessment 2000 due to the "failure of its discovery forecast". peakearl from the Oil Drum says it well:

My understanding is the USGS report is based on a statistical procedure, not geology. The procedure would predict vast amounts of oil in many regions, and enough years have passed to see if their procedure had any validity. Predicted levels of discovery have not occurred at all, and I think have invalidated the analysis, which wasn't based on any known oil. Deffayes has commented that we are a full Middle East behind their predictions, and it's getting worse with time, as discoveries continue to shrink in number and size, with no sign of the trend reversing.

This "discrediting" of the USGS stems from the following diagram, drawn by Colin Campbell (click to enlarge): 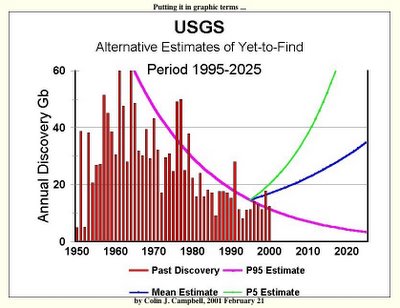 Allegedly, the USGS made the "predictions" indicated by the green, blue and purple lines, and the green and blue lines are totally out of step with actual past discoveries (indicated by the red bars). Therefore, the USGS has been totally discredited, and we don't have to pay attention to the USGS, or the sort of geological information which they analyze. There are a number of serious problems with this story.

1) The "forecasts" drawn by Colin Campbell are nowhere to be found in the USGS 2000 Assessment.

2) The USGS explicitly says that it is not making a forecast:

Note that the geology-based Seventh Approximation does not attempt to predict volumes of conventional resources that will actually be discovered in a given assessment time frame. To do so would require full knowledge of future petroleum economics, exploration technology, and exploration effort at the assessment-unit level. Rather, the Seventh Approximation estimates volumes of conventional resources having the potential to be discovered in the stated time frame.Source

3) Colin Campbell frankly admits that he doesn't understand the methodology of the USGS report:

The methodology for estimating potential discoveries of oil is expressed by the USGS in F5, F50, & F95 probabilities. Given the decline in significant new discoveries of oil in recent history, is averaging F5 & F95 predictions still a valid approach for determining the mean estimate?

I am not expert in Probability Theory. They plot amount up the Y axis and assessed probability along the X axis. The area under the curve is the Mean value. There are also Mode and Median values. The system probably has merit in assessing an individual prospect where there are actual parameters of thickness, porosity etc to compare, but I am sceptical when guessing the number and size of fields to be found, especially in little known areas. A better approach is to extrapolate past discovery trends."Source

The USGS has not been discredited at all. The "failed forecasts of the USGS" are nothing more than a fraudulent straw man cooked up by Colin Campbell because THE USGS NEVER MADE A DISCOVERY FORECAST. Rather, they tried to estimate the amount of oil in the ground, which is subject to being discovered. They tried -- by exhaustively surveying the geological potential of every important sedimentary basin in the world -- to estimate the amount of undiscovered oil in the ground, regardless of political and economic factors.

The bottom line is this: The USGS World Petroleum Assessment 2000 is a gold mine of geological information, and it should be respected for what it is, not dismissed. Let's quit pretending that geological data is irrelevant to determining how much oil is in the ground. Discovery trends are one way of understanding future discovery potential. Looking closely at the geology is another way.
-- by JD

Look, without going too much in the statistics of it, it is wrong to average P95 and P5 to obtain the mean.
USGS is probably using Maximum Entropy methods to arrive at the probabilistic assessments they make, and these probability distributions are not necessarily symmetric.
I sincerely doubt that they are averaging CDFs or HPDs (Cummulative Density Functions or High Posterior Density regions), to arrive at the P50. The same methods are capable of directly "delivering" the P50, and thus there is no need to average P5 and P95.

If CC (or anyone else) is doing such a thing, he is dead wrong and should seriously consider going back to college to get a refresher course in Bayesian probability theory or read Jaynes papers on MaxEnt methods. These methods were deployed by the industry in the 50s-60s soon after he presented his groundbreaking work on MaxEnt methods in non equilibrium thermodynamics and generalised inverse problems and guess what, they were responsible for the undisputed success in geophysical prospecting back then. (One may read pages 6 and 7 of http://bayes.wustl.edu/etj/articles/fromhere.pdf
and the corresponding references, to get an idea of the methods the industry applied in geophysical prospecting in the 60s and even get a glimpse of their mathematical basis).

Going back to these numbers, the P95 estimate is in step with the actual production curve which to me is empirical evidence of the validity of these methods. By their very nature, probabilistic methods do not "return" a single number but a probability density function i.e. a function. In order to summarize these functions, one may either graph them or report percentiles (which the USGS does). If one wants to use these functions in decision making (which is our case by the way), then it gets more complicated: without going deep into the specifics of decision theory, one could "select" the URR which corresponds to a predetermined P level which is relevant to the question being asked.
Since many things are at stake here, caution is warranted and the value with the higher probability (i.e. P95) should be used in the decision making process. People discredit USGS methods for reporting the "mean", when they should be paying closer attention to the meaning of these numbers and use the one more relevant to their decision making process.

Eye balling the graph it seems that the P95 is dead right, and Campbell is dead wrong ... so if anyone has access to these numbers, could they please post the graphs on the web?

I apologise for the pedantic tone, but these stuff are basic and they are covered in college level math courses, so I expect people who write about the end of oil and advocate the "instantaneous nuclear elimination of population centers" after the oil peaks (Stanton piece in the ASPO newsletter) to get up to speed with the probabilistic methods.

What are you trying to say here JD? I thought you and this site fully expected oil to peak within a decade, you just don't think it's effects would be as serious as some people make out.

The USGS mean figure for remaining oil has been used by the IEA to justify a peak oil year of no sooner than 2030, therefore the USGS are supporting such a date. If the USGS thought the IEA had misinterpreted their data they would be sure to tell them.

I think anyone backing a peak oil date of no sooner than 2030 deservers to be discredited.

chris,
The methodology of the USGS is key ... if the P95 curve that appears in the post of JD's is correct, it would mean that USGS have outperformed anyone else in predicting the future of oil discovery.
JD is right in pointing out the fact that CC has no clue about the methodology whatsover, a fact that CC does not dispute. The interpretation of the P95,P5,P50 curves is very straigthforward once the math have been done:
Given the data that entered the calculation, the oil discovery will follow the P95/5/P50 curves with a probability equal to 95%/5%/50%.
From this simple graph, the methodology seems to predict the reality pretty good ... curves that were not observed receive a pretty low probability, and the empirical discovery curve receives a high (i.e. 95%) probability. But in order to predict the peak, one needs additional data regarding consumption i.e. demand and temporal data regarding the time it takes for the projects to come on line. So If rembrandt is still following this blog, I suggest he updates his prediciction using the P95 discovery curve. From what I see, it is dead on the money ...

The problem here is that governments, the IEA etc use the P50 and a >2030 date for peak (after decades of continued growth). The USGS seem perfectly happy to be associated with a 2030 peak - that's why they should be discredited since it should be clear to everyone here that oil will peak within the next decade.

Thanks for understanding the point chris.
I have been dismissing the USGS till I decided to look more closely into their methodology, a task aided by JD's posts about it. I really do not know if someone screwed with statistics in the IEA or decided to use a cutoff that coincided with a preconceived view/message. This is quite an irresponsible behaviour if you ask me: when the consequences of a wrong prediction are dear, one should be more conservative in one's assessments and use a higher confidence level (or posterior probability cutoff) in one's predictions. But at least USGS is vindicated .... their methodologies seem to predict reality and put a probability (uncertainty) tag to their predictions. Yet someone somewhere decided to use a less certain prediction to deliver a message. Now could someone plug the extrapolated P95 discovery curve to Rembradt's spreadsheets?

So, is the integration of accesible non-conventional sources ever factored into these predictions before they are made or do they reside outside of the variables of them......
The thing I have never been clear about is exactly what we are looking at when we look at all of these tables or graphs.....
If for example a non-crude source of readily available liquid fuel (such as coal liquification) came online tommorow would these models still hold true or would it be counted as demand destruction credited to another source (non-crude)?

Good point freak. The Campbell graph of discovery (the red bars) does not include the contribution from non-conventional oil. It doesn't include deep water oil, tar sands, or GTL, or coal liquefaction, or ethanol, or biodiesel etc., and that is a major error.

GTL is great in my opinion when done
in an area normally who flares off gas for the impraticality or transporting it...(in an un related issue how much natural gas is flared in Iran instead of being used for electricity?)

So these things don't even figure into the peak calculations?

I also believe the SUV-era is a fluke and would have not occured had it not been for certain social trends, and as such I think early Peak or no, It will end and be replaced by what technology was heading for before it was so rudely interrupted........:)

Chris, I assume you mean 1 trillion (for P95) and 2 trillion (for P50). With 2 trillion barrels left, that would put peak sometime before 2020, not 2030, since we'd only need to use up another half trillion to reach the halfway point. With increasing demand, that's probably around 2015, if we're lucky.