331. SURGE IN OIL AND LIQUIDS PRODUCTION

The recent surge in oil and liquids production should be news in the peak oil world, but it's not. As a piece of optimistic information, it's a sore spot, and is being carefully avoided at doomer feedlots like TOD and peakoil.com. Nevertheless, Rembrandt has the new graphs up in the January Oilwatch Monthly, so lets break through the wall of denial.

For ordinary crude, the May 2005 peak stands, but just barely: 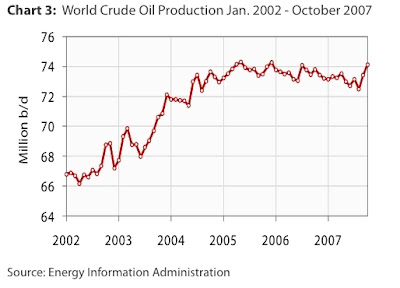 For liquids, we're clearly off the plateau and surging to a new level: 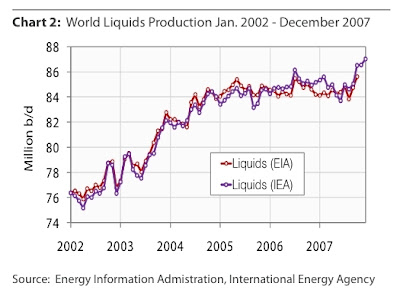 Looks like it's about time for another "prediction" from the The "Amazing" Boone Pickens:

“Global oil [production] is 84 million barrels [per day]. I don't believe you can get it any more than 84 million barrels."
-- T. Boone Pickens, addressing the 11th National Clean Cities conference in May 2005.
Source

"Supply is—you‘ve just about had it on supply; 85 million barrels a day world supply is about it. "
-- T. Boone Pickens, on Hardball with Chris Matthews, MSNBC, Aug. 26, 2005
Source
by JD

A common view in the peak oil community is that high oil prices will dampen international trade, halt globalization, and cause production of goods to be done "closer to home".

Here's a classic statement of the position:

The case of transportation is straightforward. Increased transportation costs act very much like tariffs, reducing international trade by raising the delivered prices of imports. Thus increases in fuel costs will likely lead to a decline in the international movement of goods, particularly for those goods shipped by air or truck, where fuel costs are most significant, and for lower- value bulk goods where transportation is a more important element in final price. In North America, for instance, food items travel an average of 1,500 miles from the growing-processing region to store shelves.

To the extent that increased transport costs reduce the price advantage to outsourcing, not only will this reduce the trade in goods, but also American investment in countries such as China and even Mexico, which have been the major recipients of American outsourcing.Source

Sounds plausible enough, but a reality check against the actual stats tells a completely different story. The following is a chart I constructed using the FRED graphing tool at the St. Louis Fed website. The blue line shows the price of West Texas Intermediate, and the red line shows the dollar value of US imports from China (click to enlarge): 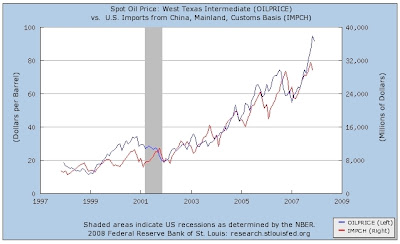 Clearly, the peak oiler theory that "the end of cheap oil will be the end of globalization" has some serious problems.

*****
In the comments, Bertrand Russell points out the decline will apply "particularly for those goods shipped by air or truck, where fuel costs are most significant". So let's look at that side of it. Dialing up the stats for air freight from the DOT, we find the following annual figures for air freight (millions of tons) between the US and the world:

As you can see, the peak oiler theory that "the end of cheap oil will be the end of globalization" blows another tire.

The same trend is also evident in the number of international flight passengers between the US and the world, which grew as follows:

The theory blows yet another tire. Wasn't air travel supposed to be the canary in the mine shaft of peak oil?

For all practical purposes, we are almost 3 years past peak oil. The allegedly toxic "gas" started leaking into the mine back in May 2005. And yet the canary is still singing strong.

*****
This phenomenon isn't limited to the U.S. Here's the worldwide passenger flight statistics from the Airports Council International (ACI): 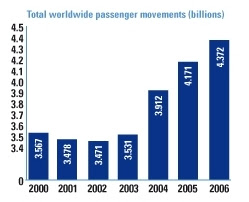 *****
To rub it in a little further, here are the stats for truck trade between the US and Mexico/Canada from the Federal Highway Administration (in billions of $):

It's becoming increasingly clear that electrification of transport (combined with conservation) is the near-term solution to peak oil. Yes, there are liquid alternatives (ethanol, biodiesel, CTL, GTL), and they will help take the edge off petroleum decline, and play a role in niche applications where liquid fuel is essential. But these liquids all have problems:
The inescapable conclusion is that ethanol+biodiesel+CTL+GTL will not be able to compensate for even a 1% decline in liquids production (=i.e. about 0.9mbd/year). GTL at current prices costs US$ 15 billion for a massive 0.26mbd facility which takes 7 years to complete Source. 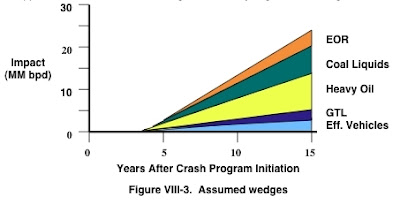 Therefore, there will be a shortage of liquid fuel, and we'll soon see the decline of the ICE (Internal Combustion Engine). ICE vehicles will be replaced by EVs (Electrical Vehicles) running on power from the grid. Even Rick Wagoner, the Chairman and CEO of GM sees the writing on the wall:

"There is no doubt demand for oil is outpacing supply at a rapid pace, and has been for some time now," Mr Wagoner said. "As a business necessity and an obligation to society we need to develop alternative sources of propulsion."

He added: "So, are electrically driven vehicles the answer for the mid- and long-term? Yes, for sure. But … we need something else to significantly reduce our reliance on petroleum in the interim."Source

Mr. Wagoner is right, and the "something else" is going to be conservation. This gives what I call the E + C Solution (Electrification + Conservation).

The E+C Solution will be the default solution when liquids finally peak because it is the most practical and efficient.
by JD

For this calculation, I will draw figures from EIA "Table 2.9: World Production of Primary Energy by Energy Type and Selected Country Groups (Quadrillion Btu), 1980-2005", located here.

I will use the following abbreviations to indicate the components of the global energy supply:

L: Liquids. This is listed as petroleum in Table 2.9. It includes ordinary crude oil, condensate, NGL and tarsands.

In 2005, the amount which each factor produced, and it's percentage of the total were as follows:

In the immediate aftermath of peak liquids, all of the other sources will be available to compensate for a decline in L. So (until peak G) the term "alternatives" will mean the aggregrate of G, C, H, N and R. As you can see, L accounts for a little more than a third of world energy production, so there is really no problem of scaling alternatives in the initial post peak-liquids phase. The alternatives are already twice the scale of the factor to be compensated for (L), and about 100-200 times the scale of the likely annual decline in liquids production (assuming a decline rate of 1-2%, see #327 below).

Now, if the alternative sources (GCHNR) continue growth at their current rate, which is conservative (for N in particular), then total growth in T due to growth in GCHNR will be:

Which is more than enough to compensate for the 0.7% loss in T due to the decline in L. That is, world energy production will continue to increase by about 1.9% per year, assuming business-as-usual growth in alternatives, even in the face of a 2% decline in liquids. 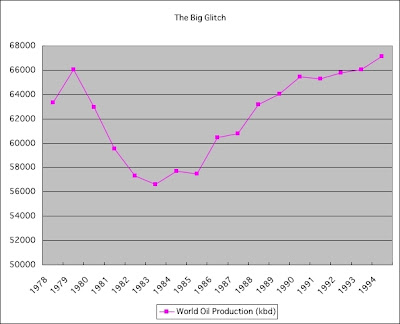 During this same time period:

Perhaps the best illustration of this principle, however, is peak oil itself, which (as of this writing) appears to have occurred in May 2005. Oil showed no growth at all in 2005 and 2006. However, total energy consumption in 2005 was 2.9% higher than in 2004, and total energy consumption in 2006 was 2.4% higher than 2005 (BP Statistical Review 2007). Peak oil is not stopping growth of total energy.
by JD
-------
*) Note that these figures ridiculously underestimate the contribution of renewable sources like solar to primary energy -- a point demonstrated by Hermann Scheer. For details, see 284. RENEWABLES PROVIDE A LOT MORE THAN A "TINY" FRACTION OF PRIMARY ENERGY.

327. STRONG ARGUMENT FOR A SLOW DECLINE

There is a lot of doomer FUD circulating in the peak oil community about how global oil production will collapse or decline rapidly in the post-peak period. Some of the worst offenders are suggesting that production will decline at rates of 8-12%, or more. These people are fearmongering, plain and simple, and have no sound basis for making these claims. Here are 4 good reasons why global liquids production will decline at a mild rate of less than 2% for 20 years after peak oil.

1) Stuart Staniford of the Oil Drum has shown that Hubbert Theory says Peak is a Slow Squeeze. His analysis shows that (on the average) the world will decline at a rate slower than 2% for 20 years. In fact, it suggests the world will decline slower than the U.S., where liquids production has been declining at an average annual rate of 1.4% for 36 years since its peak in 1970.

3) I myself have pointed out the obvious tendency of large multi-country blocks (like continents etc.) to plateau for decades, including the amazing case of North America, which has been on an undulating plateau of about 14-15mbd for almost 30 years (Source BP Stat. Rev. 2007):

4) Jean Laherrere has also noticed the tendency of large blocks to plateau, and predicts(pdf) the world will plateau for 10 years: 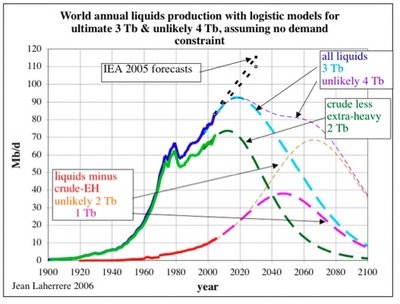 To conclude, we've got the four smartest people in peak oil saying that the world liquids decline rate will be 1 to 2% for decades after the peak.

To those doomers who remain unconvinced: I hereby issue a challenge. Post in the comments. Show me the argument that proves Stuart Staniford, Colin Campbell and Jean Laherrere have got it all wrong about peak oil.
by JD

326. DETAILED BREAKDOWN OF U.S. PETROLEUM USE

Thus far, I've only been aware of one detailed breakdown of fuel usage in the U.S. -- the DOE breakdown cited in the Hirsch report, and described in 27. WHERE DOES ALL THE OIL GO?.

However, I recently ran across a cite to another Table at the Oil Drum (unfortunately I didn't take a note of the poster's name. Hat tip in any case!) . This Table is found in a document called Ending the Oil Age: A Plan to Kick the Saudi Habit(pdf) by Charles Komanoff, and goes into considerably more detail than the Table in the Hirsch report.

Apparently the data comes from an internal DOE spreadsheet:

The spreadsheet from which we calculated Table 1 (Major Uses of Petroleum Products in the United States, 2000) and otherwise estimated the amounts and types of petroleum used in the U.S. prior to last Sept. 11 is an extensive (15 columns by 2679 rows) compilation of both oil usage and transportation energy developed by the U.S. Dept. of Energy’s Energy Information Administration for forecasting purposes. We obtained the spreadsheet from a U.S. Environmental Protection Agency staff member in December, 2001 and performed the calculations for this report during that month. While the spreadsheet itself is not available from DOE, the data in it are contained in the downloadable files listed below. Our 2000 figures are normalized (e.g., for weather) and may differ slightly from actual data. We will do our best to provide copies of the spreadsheet itself upon request.

This Table is a thought-provoking resource which I wanted to post for future reference. 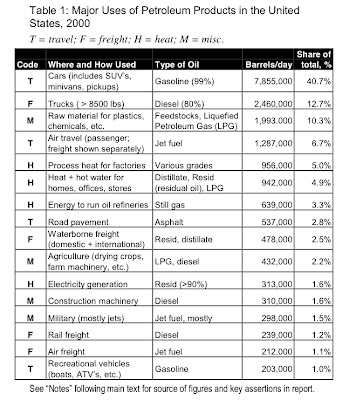