Five years ago, when I first got involved with peak oil, electric and hybrid trucks weren't even a concept. A little over a year ago, when I first posted on the subject they still seemed fairly exotic. Now, in 2009, an amazing amount of progress has taken place, and the technology for both EV and HEV (hybrid EV) trucks is rapidly filtering into the mainstream. It's becoming increasingly clear that peak oil will have little impact on tasks such as local trucking, garbage collection, and grid maintenance. Peak oil is simply occurring too slow compared to the rate of truck innovation and dissemination.

EATON
Eaton is a manufacturer of hybrid drivetrains for medium and heavy-duty trucks. Just a couple of days ago, President Obama spoke at the preview of a PHEV utility truck made by Eaton, EPRI and Ford:

The plug-in hybrid truck is the first of five “boom and bucket” trucks based on a Ford F-550 chassis that will be provided by Eaton, EPRI and Ford to public and private utility fleets in the United States for use and evaluation. In addition to fuel and emissions savings while the truck is on the road, additional energy savings are available by utilizing the electric side of the system to power the ancillary systems and tools when the truck is stopped at a work site.Source 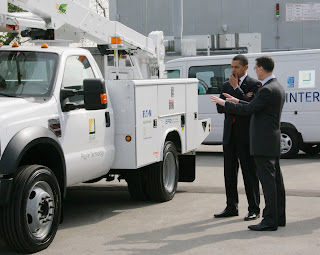 BALQON
The heavy-duty electric trucks being used in the Port of Los Angeles, which I described 6 months ago are now in full production. The assembly line is finished, and Balqon will first be producing 20 units for the Port of LA Source. Note that Balqon's Nautilus E30 Class 8 heavy-duty EV truck, and their Mule M-150 7-ton medium duty EV truck, are both equipped for fast-charging Source. Balqon is using AeroVironment's PosiCharge fast charge system for the Port of LA trucks Source.

FORD
Ford has announced a tie-up with Smith Electric Vehicles to market a fully electric version of its Transit Connect panel van in 2010. Ford will provide the chassis, brand and marketing, and Smith will integrate the EV technology Source.

EVI
Electric Vehicles International is a new player, which apparently has a significant marketing presence in Mexico. It is now offering the customizable eviLightTruck in 3 configurations -- Class 3, Class 4 and Class 5-6 -- for the US market Source.

UPS
In May of 2008, UPS ordered 200 HEV trucks with drivetrains made by Eaton (the largest HEV order in the industry to date), and 300 CNG trucks Source. In October, they ordered 7 hydraulic hybrids, and in November, they announced an order of 12 EV trucks produced by Modec, for deployment in the UK and Germany in early 2009 Source.

RYDER
Ryder is offering the RydeGreen medium-duty hybrid truck based on Navistar and Eaton technology. "According to International®, the truck has the potential to provide up to 30 to 40 percent improved fuel efficiency in standard in-city pick up and delivery applications."Source

The Kirkland company, a division of Bellevue-based Paccar Inc. (NASDAQ: PCAR), said Coca-Cola Enterprises ordered 150 T370 diesel-electric tractors and 35 T370 hybrid trucks. Kenworth officials didn’t disclose the value of the order but the fuel-efficient trucks are reported to cost around $100,000 each.

Scientists at the Massachusetts Institute of Technology (MIT) have developed a way to charge lithium ion batteries in seconds, instead of hours, that could open the door to smaller, faster-charging batteries for cell phones and other devices.

The breakthrough by Cedar and graduate student Byoungwoo Kang is the development of a reengineered surface material for batteries that allows lithium ions to move quickly across the surface of the battery and channels the ions into tunnels. A prototype battery built using this surface material can be charged in 20 seconds or less, compared to 6 minutes for a battery cell that does not use the material, MIT said.

The surface material is not new but is manufactured in a different way. This means batteries that use the faster-charging surface material could be on the market within two to three years, the statement said.

The above is just one approach. A number of fast-charging technologies are already practical and being rolled out. This was also announced last week:

The prospect of electric cars that can be recharged within 10 to 15 minutes moved a step closer last week with the announcement of a new pilot project in Arizona.

Car giant Nissan announced that it has signed a partnership with electric vehicle charging technology firm ECOtality and Pima Association of Governments, which represents the Tucson, Arizona region, that will see the three parties work together on rolling out a charging network.

ECOtality said that it would aim to have parts of the public recharging infrastructure rolled out by 2010, in readiness for the US launch of Nissan's zero emission vehicle. Nissan added that under the agreement it would then make a supply of electric vehicles available to the regions public and private fleets.

The Minit Charger fast-charge technology from ECOtality subsidiary eTec was developed in 1996, and 4300 stations are currently in use for fast charging forklift trucks. You can see a video of the Minit Charger in action here.

Toshiba also has an entry in this area, the SCIB (Super Charge Ion Battery):

Toshiba is to ramp up production of a new type of Lithium Ion battery that can charge to 90 percent of its capacity in a few minutes and is highly-resistant to short circuits.

The Super Charge Ion Battery (SCiB) is a Lithium Ion battery based on proprietary technology developed by the company and is targeted at both industrial and electric vehicle applications and consumer laptop computer use.

Production of the battery, which has been in development for several years, has already begun for the industrial market at the relatively low volume of 150,000 cells per month.

Toshiba will increase that to several tens of millions of cells per month at a new factory it plans to build in Kashiwazaki in Niigata prefecture in north west Japan, it said last week. Construction of the factory will begin in late 2009 and production is scheduled to begin a year later, said Hiroko Mochida, a Toshiba spokeswoman.

Initial production at the factory, which represents an investment of several tens of billions of yen (several hundred million US dollars), will likely be aimed at the industrial and electric vehicle markets although the same lines will be able to make SCIBs for laptop computers, she said.

At September's Ceatec show in Japan Toshiba demonstrated a laptop running on an SCIB. The battery will keep its performance through up to 6,000 recharges -- more than ten times that of typical Lithium Ion batteries -- meaning a laptop should be able to run its lifetime on the SCiB without need to replace the battery. Due to its design it is also much less likely to catch fire or short circuit if crushed or damaged.

In September 2008 Schwinn Bicycles announced a strategic collaboration with Toshiba Corporation that they think is going to dramatically improve the uptake of electric bicycles around the world. Schwinn presented the results of this collaboration at the recent Interbike International Bicycle Expo in the form of the Tailwind.

The Tailwind incorporates Toshiba’s new Super Charge ion Battery (SCiB) technology. The SCiB technology will enable Tailwind owners to recharge their battery in 30 minutes through a standard electrical outlet or as little as five to seven minutes through a commercial charger. By comparison, it takes four hours or longer to fully recharge the battery of most other electric bicycles.

Battery recharging times remain a major obstacle for electric vehicles. But perhaps not for long. Proterra claims that its new all-electric buses can recharge in as little as ten minutes.

Last week the company demonstrated one of its buses in San Jose (see the video below). Seattle and San Francisco are also considering buying the Proterra's buses.

Last week, it was also announced that the Tesla will have 440V fast-charge capability, similar to the Minit Charger specs. Apparently Nissan's upcoming TBD all-electric car will also have the ability to fast charge in 26 minutes.

It would seem that fast charging technology is already here.
by JD

Here's an interesting new wrinkle I hadn't thought of. The US electronics/appliance retailer BestBuy is planning to market an electric motorcycle, The Brammo Enertia:

Best Buy is getting into motorcycles – think Geek Squad in mechanics' coveralls.

The consumer electronics store chain is going to start selling the Enertia electric motorcycle made by Ashland, Ore.-based startup Brammo at five of its West Coast stores in May, CEO Craig Bramscher said Friday.

In time, Bramscher envisions the $12,000 Enertia, as well as Brammo's upcoming lighter-duty and heavier two-seater models, being sold across Best Buy's chain of 1,200 U.S. stores, as well as some of its 1,500 or so stores in Europe and its 270 stores in China.Source

Here's the photo and the specs: 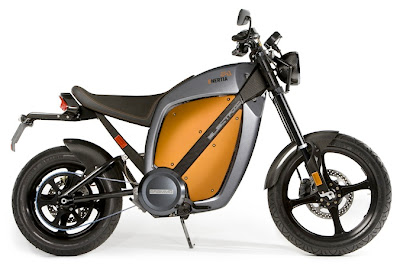 This one's a little pricey, but even today it has dozens of hungry competitors, many at much lower prices. It makes you wonder: are conventional car manufacturers and dealers yesterday's news? Why wouldn't electric manufacturers and retailers muscle in on scooters and other LEVs (Light EVs)? After all, they're just another electrical appliance. Just as we can expect electric companies to behave more like (or be taken over by) oil companies in the coming post-oil EV era, perhaps we should expect existing electronics/electric firms to play an increasing role in vehicle manufacturing and retailing. It's like I said a while back: electric scooters are going to be the next ipod. We'll be stamping them out by the millions, in 8 trendy colors.
by JD

Which means that Ken Deffeyes has crapped out once again, adding yet another flub to his long and sorry list of blown predictions. I've gone into depth about this before, but here's the recap. When we last left him, Ken had erroneously predicted peak oil for:

The US Energy Information Agency publishes monthly estimates of world oil production at www.eia.doe.gov/ipm/t11d.xls. (Microsoft Office Excel Workbook) Of course, we hope that their estimates are not politically biased. Their current posting shows May 2005 as the month of greatest world oil production. Earlier, I estimated that the peak would be in December, 2005, but May will do. I'll take it. I'll take it.Source

As you would expect, this latest adjustment also turned out wrong. According to the very spreadsheet Ken references, the May 2005 level 74.241kbd was surpassed in July 2008, reaching 74.831kbd. Naturally, he had nothing to say about this on his website. For him, making predictions is like a bear shitting in the woods. Just kick some dirt over the last one when it starts reeking, and grunt out the next one.

Of course, there's always the old standby: "We'll see who gets the last laugh, JD. Someday Ken's going to be right." Actually, I would dispute that. My current conjecture is that oil will never peak as long as Ken Deffeyes is making predictions. That's how truly rank his predictions are. But whenever Ken finally shuts up and oil actually peaks, it's not going to be Ken who is proven right. We're all going to be proven right. Me, Mike Lynch, Daniel Yergin, CERA... literally everyone (aside from the mentally retarded) concedes that oil will peak. So on that glorious day when we're all proven right, I say we all go out for a rousing mutual backslap and group hug!

More broadly, we should note that Ken, like many peak oilers, has been trying to stack the deck by restricting his prediction to conventional crude. The reality is that Ken's "peak" is being swamped by flows of unconventional liquids such as tar sands and (most importantly) NGL, as you can see in the IEA figures for total liquids: 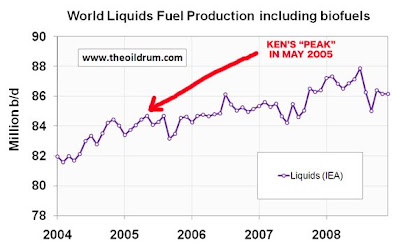 A while back, Ken liked to talk about the "Cornucopian Cemetery", where cornucopians go when they admit that oil has already peaked. We have a similar feature here at Peak Oil Debunked. I call it the Peak Oil Prophet's cemetery. It's where you go after your 9th incompetent prediction of the peak oil date craps out.

Hey Ken. Your ride is here. 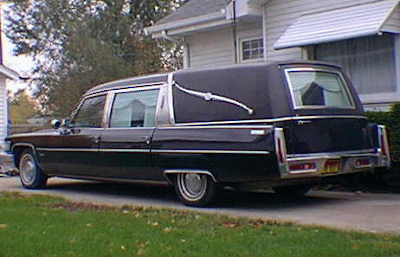