Hi everyone.
I've been on a long vacation from peak oil because it's so boring and irrelevant to daily life, but today I'd like to pop back in for an update on the situation.

Has anything happened? Not really, if by "happened" you mean any of the things the doomers predicted.

I first began writing on peak oil 6 years ago, in the summer of 2004. Matt Savinar was predicting imminent TEOTWAWKI, and telling folks to run for the hills. Now, 6 years later, I can go out on the street, and nothing whatsoever has changed since 2004. The streets are still clogged with cars going on mindless journeys. People are sleeping in their cars with the engine running to power the air-conditioning. Oil is at $75 and it's not going anywhere. Food prices and availability are completely normal. Plastic Hello Kitty paraphernalia is as plentiful and cheap as ever. Peak oil continues to be a ridiculously over-hyped non-event, just like I always predicted. I thumb my nose at it with impunity. LOL.

The Oil Drum doesn't even bother with new posts anymore. Just recycled versions of the same old "oil spill" post, flopping over and over like a flat tire, wump wump wump. Quite a comedown from the heady days of A Nosedive Toward the Desert in 2007.

Yup, peak oil is yesterday's party. The IEA is yawning and predicting oversupply of oil until 2015. Lucky us. Five more years of "topics for discussion" from Gail the Actuary
Source

Matt Simmons' ongoing nervous breakdown continues to blossom in fascinating ways. Last week he predicted a mass evacuation of gulf states:
"We're going to have to evacuate the gulf states," said Matt Simmons, founder of Simmons and Co., an oil investment firm and, since the April 20 blowout, the unflagging source of end-of-the-world predictions. "Can you imagine evacuating 20 million people? ... This story is 80 times worse than I thought."Source Yah, that's some funny stuff. I think Matt Simmons is about 80 times more mentally unstable than I thought. 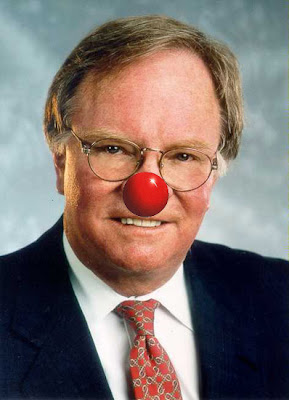 Matt "Bozo" Simmons
More hysterical bullshit from Matt Simmons:
"Mexico's ability to export oil will be over by the end of 2009."
(Spoken prediction made at 35:50 of the interview available here)
The reality:
Mexico exported 1.59 million barrels of crude per day in May 2010.
Source

Speaking of the mentally ill, Mike Ruppert predicted that a nuke would be used on the gulf oil spill in a week to 10 days. That was a month ago. LOL.
"I predict that US Continuity of Government provisions will be activated and that FEMA will, before end of summer, be placed in complete control of the Southeast United States… limited martial law." Source

"I have changed my point of view about future prices," said Campbell, who used to think the peak in conventional oil production, which he believes happened in 2005, would lead to a relentless price surge.

Instead, the record rally led to a peak in demand in the developed world.

"Peak oil drives prices up in the first place. It has its own mechanism. We're sort of at peak demand right now," Campbell told Reuters from his home in the village of Ballydehob, West Cork. "I think presently the price limit is about $100."Source

Good job Colin, you ridiculous dumbass. You would have figured that out a long time ago if you had the sense to read Peak Oil Debunked.

"As I said last year, I expect that by the end of 2006 we will be in the teeth of a ferocious net oil export crisis."Source

Stay tuned folks. I've got a few more doomers to scalp before I'm finished.
by JD