We're all familiar with the classic Kunstler rap:

The age of the 3000-mile-caesar salad will soon be over. Food production based on massive petroleum inputs, on intensive irrigation, on gigantic factory farms in just a few parts of the nation, and dependent on cheap trucking will not continue. We will have to produce at least some of our food closer to home.Source

The logic seems to be straightforward. It takes more energy to transport food over long distances than short distances, so peak oil will drive a shift to local agriculture.

So what does local agriculture look like? Here's a representative quote by Megan Quinn of Community Solutions (a somewhat delusional group promoting Cuba as a model for peak oil response) on the structures of local food:

Well, a variety of structures is a good way to go. We have on-farm and in-town vegetable stands operated by farmers, farmers' markets, fairs, CSA or Community-Supported Agriculture farm subscription programs, cooperatives, and direct sales from farmers to consumers, to name a few. Importantly, there is a human element in local food systems. Direct relationships are developed between those who grow the food and those who eat it. We should embrace that.Source

This all seems reasonable on the face of it, but as I noted in the previous article GOING RURAL FOR PEAK OIL: BAD IDEA, close analysis shows that farmer's markets, vegetable stands, CSA and direct sales are all incredibly inefficient in terms of fuel because they require long drives in lightly loaded vehicles. Local agriculture, as it exists today, is basically a highly energy-intensive form of cat herding. This comes through vividly in a revealing quote from Jeff Rubin's book Why Your World is About to Get a Whole Lot Smaller:

And if you have ever been to a farmer's market and have seen the fleets of Land Rovers and sleek Volvo wagons heading home with their cargos of organic cavolo nero and free-range Berkshire pork... 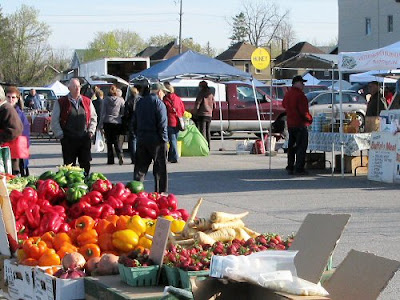 Farmers Market: Plenty of Parking is a Must
The inconvenient truth is that inefficient gasoline guzzling lies at the very heart of the local food model. And, as we've seen, this totally defeats the purpose of local food :

In the worst scenario, a UK consumer driving six miles to buy Kenyan green beans emits more carbon per bean than flying them from Kenya to the United Kingdom. Source

Here's a quick calculation to give you a feel for the problem. Suppose Joe Sixpack gets in his 20 mpg vehicle, and drives 4 miles to pick up a pack of hot dogs at 7-11. This will consume 0.4 gallons of gas per pound of hot dogs (1 pack = 1 pound).
Now, a semi truck gets about 90 net ton-miles/gallon, assuming that it makes the return trip empty. So a semi can deliver a load of hot dogs (20 tons) coast-to-coast and return empty on 1333 gallons. That translates to .03 gallons per pound.
In other word, Joe Sixpack will burn 13 times as much fuel, per dog, driving to 7-11 than the semi which brought those dogs 3000 miles across the country.

Interestingly, a livestock farmer named Bob from Schoharie, New York -- who is actually involved in the local food business -- echoes these concerns. He confronts this every day in the real-world context of marketing his product:

In fact, local food currently uses much more fossil fuel, especially in distribution, on a per pound basis. This is so painfully the case that one example will suffice, my own.

I drive seventy miles round trip to the farmers market on Saturdays. Some people drive more, some people drive less. I think that on average, my mileage is not untypical, but the average might be closer to fifty miles. This market season, on a bad day, I would sell ten pounds of meat (an amount that does not cover the cost of gas to get there). On a good day, I would sell forty to fifty. One of the biggest farmers market meat sellers in our area that I am aware of probably sells about 200 pounds a week.

I would have to sell 750 pounds of meat every week to match the gallons per pound efficiency of industrial distribution. That is fifteen times more than I currently sell, and 3.75 times more than the biggest seller in our area that I am aware of.

Isn't that amazing? Industrial is at least 3 times more efficient than the highest volume local sellers, and that's not even including the monstrous waste of the buyers driving 50 miles round trip to buy a bag of local food!

That cracking and crumbling sound you hear in the distance is the accepted wisdom.

Bob takes the argument further in a post titled Pound-Gallons, Not Food Miles:

In the early 2000s, a report from the Leopold Institute popularized the phrase “food miles.” The research detailed in that report showed that locally produced and distributed food uses less fossil fuel than industrially produced and distributed food because it has fewer food miles in it. Since the publication of that and subsequent reports this idea has become dogma and the phrase “food miles” has become a part of everyday language. The problem with the Leopold paper is that the comparison they did was for fully loaded local, regional, and national trucks. In reality, local, especially, trucks are not fully loaded, they are often mostly empty.

Awhile back I got some flack for a post and a follow-up post in which I argued against this food miles dogma and claimed that local farm and food systems, as they really exist today, do not use less fossil fuel than the industrial one. I still believe the argument I made in those two posts. I also still believe that it is important to find ways to decrease, on a per pound basis, which was the basis of my comparison, the fossil fuel consumption of local farm and food systems, especially in distribution. I would like to propose that we abandon the concept of food miles in favor of the more revealing and accurate “pound-gallons,” a horribly ugly phrase, I admit. What matters in terms of fossil fuel consumption is not how many miles the food has traveled, but how many gallons of fuel are in each pound of food. (Pound-gallons can also be used to compare fossil fuel consumption between industrial and local food production as well [eg, tractor use]) The food miles framework is very misleading. The reality is that there are substantially fewer pound-gallons in 40,000 pounds of produce trucked 1500 miles (0.0075) than in 200 pounds of produce trucked 50 miles (0.021). At 550 pounds of produced trucked 50 miles, the local pound-gallons and the industrial pound-gallons would be equivalent. (See the link to the first post above to see the math)

Once we adopt pound-gallons and abandon food miles, we see that we have a long way to go before local farm and food systems are using less fossil fuel, especially in distribution, than the industrial system. We need to get substantially more produce on each truck and/or transport that produce substantially fewer miles.

The situation is exactly the opposite of the common wisdom. The 25 mile farmer's market salad is actually more fuel intensive than the 3000 mile Caesar salad.
by JD