It's official. Peak oil is a loser. It blew a tire on the curve, and lost the TEOTWAWKI 500 to the ongoing US financial meltdown. Valiant efforts are being made at the peak oil sites to maintain interest and somehow blame the collapse on oil, or at least find some flimsy connection... to no avail. The PO community is looking increasingly like the village idiot who warned everybody about the tornado, just before the big flood hit.

Now that most of Wall Street has been vaporized, peak oil isn't going to be the hot cottage industry it once was. The groupies will now shift to the real rockstars of the global collapse blogosphere -- the finance doomers. Pity the poor peak oil sites... viewers melting away like the Greenland icesheet, page views slumping like WaMu stock...

Amidst the carnage, we can single out one man for some well-deserved kudos. That would be Mike Lynch, who called oil "the mother of all bubbles" on April 21. 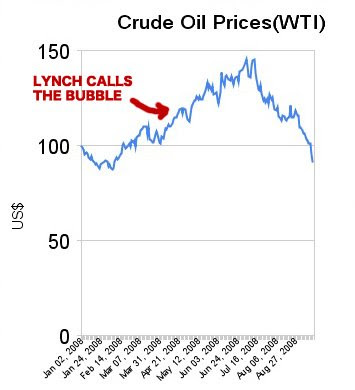 THE OIL BUBBLE
Nice job, Mike. I'll take you out for some octopus balls if you're ever in Osaka. Of course, the peak oilers adamantly refuse to admit that oil was a bubble. They stand ready to defend peak oil at all costs, even if nobody else gives a shit anymore. When Jerome a Paris carefully explains why his "Countdown to $200 oil" series is still relevant, even though oil prices fell off a cliff, and the US banking system imploded, the peak oil die-hards will dutifully nod their heads and hit the +1 button.

Of course sane regular Joes like you and me know what's up. We know for a fact oil was a bubble because we looked at the fucking picture.

Indeed, the 2008 oil/commodity bubble was brought to you by the same greedy jerkoffs who brought you this fiasco: 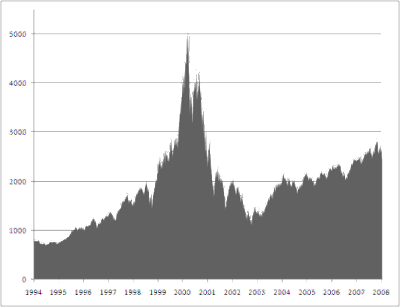 THE DOT COM BUBBLE
And this monstrous foul-up: 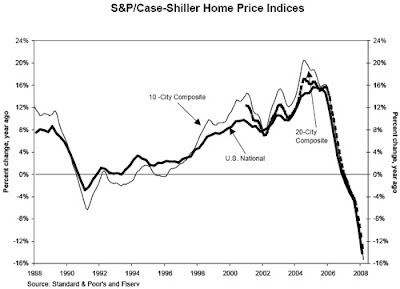 THE US HOUSING BUBBLE

With the US economy swirling down the toilet, I'm guessing it's going to be a while before peak oil gets sexy again. In the meantime, we should probably address the real underlying problem: the out-of-control casino of greed-crazed vermin we euphemistically call the "financial system".
by JD

One of the most far-fetched peak oil scares is the idea that peak oil is going to cause mass starvation because fertilizer is dependent on oil. This isn't even remotely true, and if you're new to peak oil, this article has all the info/links you need for a more realistic understanding: PEAK OIL AND FERTILIZER: NO PROBLEM.

Generally, the peak oiler alarmist approach is to look at the fertilizer problem (and everything else about peak oil) strictly through the lens of supply, i.e.: We need natural gas to make fertilizer, and when gas starts running low, we're going to be in big trouble. Even that statement is wrong (because fertilizer can be made from coal, or hydropower, or nuclear), but it also ignores the potential for innovation on the demand side, which is where the real action is at the moment.

For example, Arcadia Biosciences has developed nitrogen-efficient crops which provide the same yields with 1/2 to 1/3 the fertilizer:

...farmers can reduce the overall amount of nitrogen required by employing new biotechnologies, such as the nitrogen use efficiency (NUE) improvements offered by Arcadia Biosciences. By engineering crops to overexpress a gene that allows roots to absorb more nitrogen, Arcadia scientists have shown that "it's possible for NUE crops to produce the same yield with half as much fertilizer," president and CEO, Eric Rey, says. "In canola, we saw a two-thirds reduction."

Seeds bearing the technology have already been licensed to agricultural giants Monsanto Company and Dupont's Pioneer Hi-Bred International in the case of canola and corn, respectively—and even grass seed from Scotts Miracle-Gro Company may one day employ it. Although field trials over the last four years have proved the genetic changes effectiveness, further testing and government approval means that such crops will not be grown before 2012.

"It's a big economic benefit for farmers if they use only half as much nitrogen as well a big beneficial impact on nitrogen runoff into waterways," says Rey, who hopes that this product will be adopted as quickly as herbicide-resistant crops, which only took five years from introduction in 1998 to become nearly 70 percent of the corn grown in the U.S., and is now nearly 90 percent. "A reasonable expectation is that there would be a dramatic reduction, maybe by 2018."Source

The Chinese recently announced a nationwide release of genetically-engineered rice, and are working with Arcadia to develop nitrogen-efficient rice:

The Chinese have already developed genetically engineered rice strains with bred-in pest and disease resistance. They’re also experimenting with new nitrogen-efficient rice that needs only half as much fertilizer to get top yields. The new rice thus costs much less to grow, and emits far less greenhouse gas per ton of rice produced. They also say biotech rice “escapes” will not be a problem, since they’ve pre-programmed the rice to be hyper-sensitive to a particular herbicide.Source

This is a hot area, and Monsanto is also in the game:

Monsanto is developing corn that will yield better under normal nitrogen conditions, or to stabilize yield in low nitrogen environments. Last year, the company’s nitrogen trials demonstrated a 5 to 15 percent yield increase across limited nitrogen environments. Across three locations in Illinois and Iowa in 2006, Monsanto’s lead N utilization gene showed no yield drop-off as the N application levels decreased from 180 pounds per acre to 40 lbs./acre. Just recently, Monsanto and a company called Evogene announced a collaboration to improve nitrogen use efficiency in corn, soybeans, canola and cotton. Source

Conclusion: The peak oil "fertilizer crisis" continues to recede into the distance like the silly fantasy it is.
by JD